...and we thought April was the delusional of the pair 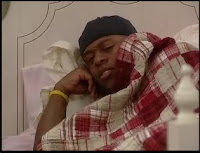 Ollie is officially drunk with power. Not only is he certain that he'll win the Veto, but that he'll also take Jerry off the block and force Dan to put up either Keesha or Renny. In fact, since he gets to decide, he's decided that Renny will be the replacement. Great way to repay her for keeping you off the block, bud! Even if the Veto isn't used, he thinks that he and Manchelle can somehow sway Dan into keeping the person that he wants. Sorry, let me correct that. They believe they can threaten Dan into voting to their advantage.Wait a minute...that wasn't part of the deal, was it? They're certain someone from the other side is going home this week, so the three celebrate their great triumph (because they've tooootally won already), and seal it with a kiss. Jerry doing the kissing, of course. Of Manchelle, not Ollie...yet. Technically, he's still laying the wet one on a guy.

who do you think would win in a fight...Manchelle or Mike Tyson.........ya that's just silly.....Manchelle would kick his ass with one hand on her BB trophy.

(do they give a BB trophy?)

lets face it, Dan screwed up and memphis may be going home... All ollie and michelle has to do is convince renny who hates memphis.. now thats not that hard to do

I like memphis and hope he wins veto. Then I hope that dan used ollie/michelle threats against them as a reason for puting one of them up. Come on Dan, be a player and send OLLIE home. He has done nothing this whole game. he couldn't even win hoh on his own, he just is controlling yours!!!! Why did you make that dumb a$$ deal anyway?