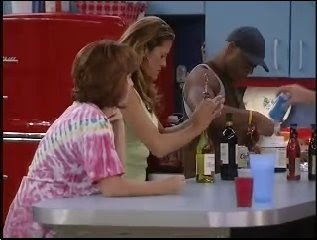 Hopefully something appalling and awesome happens. This is April's chance to go out with a bang, and be the bitch she keeps promising she'll be.

Btw, I tuned in to BBAD Radio expecting to hear from Brian and Co. Instead, BB9's Jen is on there to make a shocking announcement- Ryan cheated on her. Earth shattering. That relationship was so solid, how could this happen?! Didn't you see how loyal Jen was to her man in the game?! Anyway, for anyone who cares- Ryan moved in with Matt in Boston, and have no fear, Jen's finding comfort in Alex from her season. What is it with him and settling for BB sloppy seconds? Ugh. I apologize for wasting brain cells on this story, and giving that leech any attention whatsover, but it's been a slow day in the house.

YAY alcohol but BOO for Alex and Jen. I have lost all respect for Alex....and I am sure he will be losing alot of sleep over that!

Ugh, awful news all around. Ryan moved in with Matt, and Alex is with Jen? Next thing you'll tell me is that Angie is with Jessie. Oh please God, don't let that happen!

Speaking of, the tool is selling a pair of green shorts he wore on ebay. The item description is hilarious, it almost deserves its own post.

I thought Alex was cute, but he had very little pride...and taste in women, obviously.

I don't know, Scott. I think Matt and Ryan make a cute couple. Oh, wait! Maybe I read that wrong. Maybe it wasn't Matt that Ryan cheated on Jen with ;)

She also kept pointing out that he's in his late 20s, and still hasn't completed the 2 credits he needs to graduate from college. He's not a nice guy, etc. etc. Uh...that stuff bothers you NOW? Idiot.

I was actually happy to read that. =P

give me a fuking break, some of you people need to get a life. what would you be doing if it wouldnt be for big brother. Get the nut house ready when they cancel this show

and christine, none of bb people will be losing any sleep over your insane jealousy

Yes- you are totally right about people needing to get a life. You must be way cooler than us because I see that you were up at midnight posting negative comments on a BB board. Wow- you must have a really interesting life- way more interesting than us.

I'm sorry that we happen to have a favorite show that we like to discuss- I wouldn't say that any of our lives revolve around it. But your life clearly revolves around making negative posts on BB boards- which is really awesome.

And, I know that it is difficult for you to understand with such limited brain capacity- but what Christine said was a joke. That's right- a J-O-K-E, that is why she put those three little letters "lol" at the end.

Have a wonderful Day!!

WARNING. This is not a safe web site. Your ISP is not safe or protected here. Be wary of posting on this site.

I don't remember how ryan and Alex are. how long ago was that anyway??? oh how short a BB star shines....

damn. now jenn is going to have to redo her entire my space/facebook pages. it's covered in her and ryans true love and "we are so perfect for each other" garbage. sucks for her.
ryan and matt.? couple of loser tools. they will make a perfect couple. hope matt enjoys taking care of all ryans needs cause he can't even shit without jenns help.
alex and jenn...well at least she now has something to put up on her pages. alex was dating danielle BB8 i thought. boy gets around! i guess i gave him way too much credit. then again he wasn't in the game long enough for me to really dislike him. he goes on my tool list now as well. damn, got to get a new sheet of paper!!
oh, and in case "anonymous" douchebag can't tell....i used sarcasm in writing my comment...eesh.

caller44, you could have left that gabbage in the gabbage bag. it serves no purpose at all. Another person that have nothing to do but be negative of other people. youre just a loser

What is gabbage- is it similar to cabbage- like a vegetable?

Oh yeah, comment on someone's spelling error but ignore your own errors........

It is a big drag when you put up a post criticizing somebody's spelling and then fuck up your own spelling in the post. It makes a person look like a big, old, stupid asshole. LOL!

All of you sound stupid insulting everyone over trivial topics.

you no funny and me speak no english.(now)