Natalie is the Pandora Box Owner 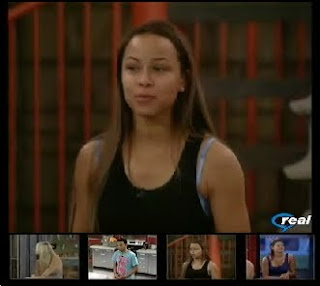 I'm sure everybody thought that the lengthy trivia meant it was nomination time. Instead, it was the Pandora's Box bullshit, and details are sketchy since then. First, Natalie said she didn't want to talk about it, but that she can't participate in the POV. After consulting with Kevin, she now has an elaborate story about how by choosing the Pandora's Box she got twenty minutes with her boyfriend, and that he proposed.

She's proud of her various stories - "All y'all got got by an 18 year-old", she said before her proposal story. Please tell me these people aren't dumb enough to believe her. Something tells me they do, though.

im over this season.

thanks a lot for the updates guys!

LMFAO@ the people who cant have their way who are quiting for the season. They had a thread on CBS that said, Arent you tired of people saying they are going to quit just because their favorite houseguest are no longer here.

Damm didnt CBS accomondate you guys one time with the coup d"etat earlier in the season. I dont think CBS really care to much about whether you all quit now because the season is 2 weeks from being over. LOL

AName, you can bet CBS cares about these last 2 weeks. Ratings were doing very well until this week and it's going to hurt the overall ratings.

Of course I wouldn't expect a hayseed like you to understand this, lol.

The ratings will be fine.

This Sunday is a holiday, so nobody cares about the ratings.

The rest of the broadcasts will be action-packed no matter who is left. Tuesday is veto ceremony, eviction, and part one of the final HOH. Thursday is the rest of the HOH rounds, and the final eviction. The following Sunday will be a clip show, and then the finale on the following Tuesday.

Live feeds is another matter, though. Dealing with the two Queens in their HOH throne this weekend is going to be a tough task. Jordan (without Jeff) and Michelle aren't the most exciting people either.

Thanks for reminding me that im a hayseed, I was wondering where my title had drifted off too. Youre so gracious. wink wink

Can we keep the insults to a minimum please? This is, after all, just a TV show.

Who just made a comment regarding people jumping on bandwagons. Well here I am, not jumping on another bandwagon. I'm still getting shit for it. Contradict much?