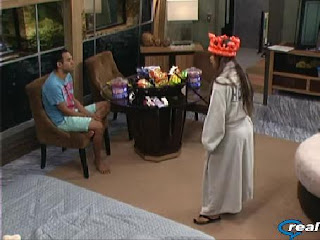 This is the outfit that the Queen plans to wear to the nomination ceremony. Even though nominations are just a formality, and the POV winner has the real power, Natalie and Kevin are planning a sort of fake fight for the benefit of Jordan and Michelle. They're also scheming new pranks to pull on Michelle. Really classy, those two. Kevin was called into the diary room, though, and informed that they can no longer mess with her.

The bulk of the nomination speech, though, will be directed at Michelle. Here's what she plans to say:

"Michele, I'm nominating you for personal reasons. Yes, Chima got kicked out, but what America doesnt know is that you were the cause of her getting kicked out. You were the reason Chima threw her mic in the water. By your actions you threw all your Christian values away. Michele, I'm also a Christian, and one thing I've learned as a Christian is not to make a deal with the devil. You offered a final three deal. Well, Michele, I decline your deal because if I would have taken your deal, I would have accepted a deal with Satan himself. Yes, this is a game, and I'm here to win a half million dollars, but as my dad would say 'winning a half million dollars would be nice but not at any cost'. And if it means I have to sell my soul to the devil then I won't be winning the half million dollars...I did it with my morals, my integrity and I still have my soul in tact."

If you want to see this for yourself, go to around the 12:40 mark in Real's "wayback machine".


In case you haven't heard, last night the final four all received new wardrobes, and all seemed to enjoy themselves trying on clothes. Kevin and Michelle pledged to go after Natalie, but of course he ran right up to inform Natalie everything Michelle said.

A smelly little nutbag. One of the finest America has to offer.

Whatta slore! If Gnat is a Christian, my mother was the MGM Lion!

Awww, tears are running down my face for Michelle right now. You now get my vote for the tricks that are being played on you