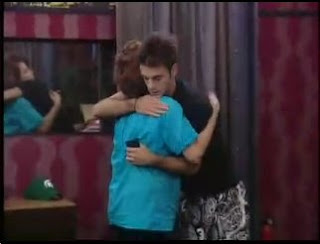 We had 20 minutes or so of fish after Ollie called Dan a "faggot", and we've returned to Renny visiting Dan in the HOH. Dan asked if he did the right thing today, and Renny said "yes". She does question if it had to be done in such a dramatic, controversial fashion, but they now all have to just move forward. She also asked him why they don't believe his pictures are real, and his only answer is that he appears slightly bigger in his football picture.

Dan also asked if Michelle has approached him for a vote, and Renny confirmed that she had. She says that she just told Michelle that she's too tired to talk right now, but she says that it was hard to look at the desperation in her eyes. The both agree that as the numbers dwindle, they'll have to start evicting people that they really care about. "I like Michelle but she is a fierce competitor, like April was."

did anything happen to ollie for his behavior? btw this is my fist time to the site and i have to say you do a great job. found u through the big brother network. don't have a google account either.

I think he was talked down when he went into the DR. They stopped showing footage of him for a while.

The sucky part of this time of the day is that everyone naps, except Ollie and Manchelle. Grrrr.

I just found this site and I love it too!!! Except I'm a little bit of an obsessive person...so...it may end up being a problem...lol

Love what's going on in the house...Dan has shaken it up more than the earthquake did!!!

Dan need to eat, hes so damm skinny. Its a shame

Do you really believe that? Again, nobody has even mentioned his color. I liked Ollie (until this week), and there was a house guest thrown out a few years ago for damaging the house. I don't want him tossed. I'm more than happy that Michelle is probably going.

Oh yes, everybody is picking on the black guy only because he's black! Is anybody else in this country tired of hearing that line? Enough already with shit!

Ollie has been pretty quiet up until now. He did whatever April told him to do. One thing doesn't go his way and he stomps around like a violent toddler. Guess now we know why he said he never had a girlfriend,lol. What a total loser

i asked if ollie got punished because he was destroying property not because of his skin color. last year jen got punished for destroying dicks cigs. i didn't like dick's play because of his mean personal attacks but he was smart enough to know the rules and not destroy peoples things so i would assume that ollie would get some kind of punishment for damaging big brothers property.

btw i liked ollie until he started throwing fits. you are playing big brother. people will lie to you. only two can make it to the end. why would he think dan would really let him call all the shots? I was hoping when april left he would start using his head. him and jerry act like they have been so honest and trustworthy but those two were the reason brian left after both giving thier words. it doesn't matter what he did they threw him under the bus then judge others for playing the game too. ollie just self destructed himself out of the game because the moment hes on the block, and he will be either thursday during double eviction or if he wins that he can't play in the next one, they will voite him out for sure!

Thanks for this fantastic website. Being a rather "newbie" with reality shows & esp Big Brother, how does double elimination (or eviction?) work? If they vote out Michelle, is Jerry the other one to go, or do they have a quick HOH & nominations ceremony & another vote? Thanks in advance for any clarification! LOVE this site!

Welcome to the site!

Double elimination is basically a whole week of the show crammed into an hour. The house guests are surprised when the first eviction occurs right at the beginning of the show. They immediately move on to a HOH comp, and the winner has to name two names on the spot. They play a quick veto, and that ceremony is held on the spot. Then the second person is voted out.

The show ends with another HOH comp, although it may not necessarily end while the show is still on.

poor ollie, just like mike vic with the dogs, people will make you out to be the biggest criminal if you dont look like them. And they go out and shoot a helpless deer and say its fine, this is a sport. wtf

anon. hes alone with jerry, hes gone anyway and what make you think its going to be a double elimination, it wasnt in bb9.. sheesh

They announced last Thursday that this week's eviction show will feature a double elimination.

I love Renny's instincts in this game but unfortunately for her, her strong liking for keesha will get her evicted within the next 2 weeks.

As a "faggot" myself, I think this chump needs a DQ for hypocrisy...never ever would it be acceptable to result to racial slurs because you got played. He needs to grow up and play like a man. He's been a non entity in this game and will go out that way. Peace out. Faggot Jim. Wink.

I'm really starting to wonder about Dan. He's acting more cocky than Eric BB8. He's talk in DR are getting old and it really sounds more and more scripted. I know I'm sounding like Manchelle. But I'm finding myself not liking him. What was the bit about scripting POV meeting??? Renny was right, that isn't right? FISHY!!!!

oh, ollie said more than faggot..he also told memphis to "suck my dick...you faggot."
nice mouth from Mr. "i don't swear."
i'm sure his folks have even more reason to be proud of their little boy who still lives at home at age 27.
proud, proud moments for ollie just keep em coming!!!


please don't go down the road of color...ugh.
it is so old, truly!

Michelle was going on about the pov ceremony being scripted b/c i guess the camara guys/staff were directing a little more than usual. Doesn't she stop to think that MAYBE they know what was going to happen b/c dan kept talking about it? They wanted to make sure they got good camara views for it!!! She and ollie i think are the biggest sore losers ever on this show. Good riddance to them. Btw, i did mention on another comment page that someone got tossed from the game in season 5 (?) for tossing chairs and things in the by. Why not the same for ollie? I don't have a google account that is why i am 'anonymous', but my name is stacey for those who wish to respond with my name!!

Why do people get so upset when you call a spade a spade?

Ollie acted like a punk and passed out physical threats and then he was to scared to deliver because that is typical punk behavior. He has probably never been in a real fight in his life.

Who still lives at home at age 27, get real.

Why do you have to go racial calling Ollie a spade? What's up with the comments on this site now? When are they going to remove the anonymous comments. It makes me sick!