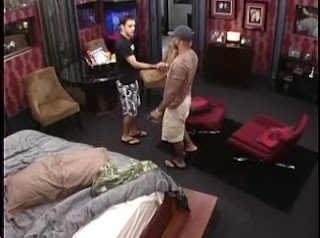 D: Like I said if this blows up I gotta cover myself. Do you have a problem if I ask you in the meeting - saying a person?
O: It's my decision, right?Let's do a walk through of your speech.
D: Here's the thing I'm not gonna tell you, but...
O: Where do I come in at?
D: I'm gonna ask as a replacement who do you want?
O: I'm down with that.
D: When we're in outside lockdown, I'm gonna ask - her or her do you want something to drink?
O: If I'm the one calling her out, I want it to be my decision, not yours. Honestly Dan, you're gonna break the tie breaker either way. Don't include me on it, man. I don't wanna call Renny up on it, dude.
D: That's what I need.
O: If you're still deciding, I told you who I wanted to go up. That's the deal and that should be final, but obviously you made prior commitments and that's something I you didn't know when I made the deal. I have a problem putting Renny up, but not Keesha.
D: I understand that, but no matter what happens I'm gonna have a lot of people pissed off. This is the last thing i need. If i do ask her to get a drink of water can you say that?
O: Thats tough, dude, cuz it's really not my decision to do that. That's like me lying when you're picking her, not me. I don't wanna come off as a liar like that. OK, I'll do it. If that's the case, man, I'll do it.
D: I haven't decided yet. You can't bs around. If that happens you're not gonna be happy with what i do. It's not gonna be cut and dry, so...
O: You don't think I have a right to know what you're gonna do?
D: That's my way of telling you; by asking if they want something to drink.
O: At the same time, I don't wanna be vulnerable. I'm being thrown under the bus.
D: If you see what I'm doing...
O: Just don't lie, man.
D: I'm telling you right now if there's any bs before you say her name, I'm not playing.
O: I'm not mad at you. This is huge no matter what. If it looks like its my decision to do it, it'll come out eventually. Do you think they'll be in good graces with you?
D: After what i do?
O: Yeah, you got my word, man. I won't adlib or nothing.
O: You never cease to amaze me, man.
D: It's gonna be towards the end...
O: I won't screw you up.
D: If theres any bs, I will pull the trigger.
O: I won't, man.)
O: Yesterday, when you told me to walk down the stairs so Renny could see me, why did you do that?
D: I didn't want them to think they were being put up.
O: You're a character, dude.

ollie is going to be so pissed at dan. dan is super nervous it's pretty funny to watch.

I'm lost.. is dan going to still put up Michelle and toying w/ Ollie? or is Ollie & Dan in a "super duper" alliance? dan is very stupid or knows these people very well...

i'm pretty sure dan is still putting michelle up..i very well could be wrong. we'll have to wait and see.

I watched that convo go down on the feeds and it confused the heck out of me, I just re read the exchange and I am still confused....

Thank God we are on trivia and it is finally going down now...

yeah dan is a little hard to read at times. all i can say to ollie is if it's too good to be true, chances are it's not.

What in the world is Dan trying to do? The conversation seemed like the exchange on the show with Renny last night.

WTF.....I have no idea what is going on! I guess I'll just have to wait intil it happens

Butterface has been nominated and will now proceed to flip the fuck out!

Thank Goodness!!!!!!!!! I was getting worried that Dan would do something even more stupid than the deal with Ollie to begin with!! Now lets all sit back and watch the drama of Ollie, Jerry, and Michelle unfold and Dan cover his butt.. that is if he even comes out of HOH room!!!