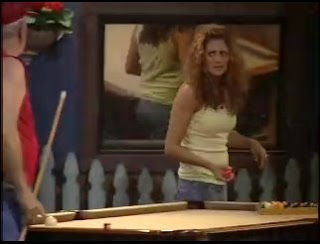 Just moments after Jerry claimed that they've been nothing but nice, Michelle has to open her big mouth. "How is he a football coach? He's a fucking liar. He ain't no fucking football coach. He's a fucking cheerleader. That's why he's always got to be there because he has to go cheerlead. Dan don't know how to suck a pussy. But he knows how to suck a dick. Some other guy probably has his pussy now." Ugh. They've spent their entire time playing pool talking about what terrible people Memphis and Dan are.

Oh yeah, and Michelle added that Memphis would probably like a little "Brokeback Mountain action".

Oh my gosh....I wish all of America could see these feeds.

Michelle is disgusting!! These three are pathetic. I've seen sore losers in my lifetime, but these three take the cake.

Jerry has been so insistent on how rotten "they" are, but all he does is sling bile. What a nasty, bitter, old man. And Michelle...good heavens, I hope her mother isn't watching. She's a trashy pig.

OOOOOOhhhhh, they are just now talking about "double eviction"....they want one bad, just "not this week!". ha ha ha Be careful what you wish for!! :)

Now back to the fishies.

They have been making those allegations about Memphis for a few days now.

It is starting to tick me off!!

Manchelle's just trying to deflect from the fact that she's all about Memphis, and she probably hopes that he's gay so that she'll have a chance.

ugh. can we not listen to michelle's sailor mouth?

please let her be gone soon?

OMG, manchelle, fugollie, and jerriatrics are the biggest sore losers and they talk more trash and make up more lies than anybody in big brother history. Please send manchelle home and for double eviction fugollie

Manchelle when you read these comments you'll prolly be thinkin that america loves you but guess what we think youre a trashy pekingese dog. Sorry but playboy no maybe skanky ho's.

Fugollie you're nothing but a pussy who got white ass and didnt know what to do. sorry but america laughed at you loosing your manhood on national tv.

Jerriatrics you are a vulgar old man and if my gpa ever spoke and acted like you I would disown him. You make old men look horrible.

ugh...whatever Manchelle....I am happy she is leaving on thurs and lets all hope jerry is right behind her. I want Ollie to stay because he is just awful at this game...."you wanta play?, OK then lets play!" ya right Ollie the game passed you buy the min you banged the whore.

All three are hideous sore losers, acting like they're in middle school. Grow up and show some respect!

ya know, by now i expect jerry and michelle to sling vulgarities. they have been doing it since day one. it amazes me though, how a "religious man" who has "morals and conviction" can sit by and laugh, egg on, and encourage such filthy talk....ollie you make me sicker than the other two.
i don't believe for one minute that ollie even goes to church let alone follows the bible. he has proven time and time again that he is immoral. he may not have taken a drink since he walked in BB doors saying..."suck my dick you faggot" has certainly got to be one of the worst things anyone has ever said in this season as well as the others.
i expected that from dick BB8 but he never claimed to be moral.

I would love it if BB10 took Ollie out for ignoring them when they called him in, and certainly for that horrid comment he slung at them. Same with that foul mouthed Michelle.

Ollie needs to go out the door immediately after Michelle on Thursday night........along with the paid actors who are portrayed as his parents.......the disgusting pig!

Callie44
Ollie did drink on BBAD. He took a sip of Aprils Beer. It was just a sip but he did drink some. And I agree he shouldn't have made such a point of talking about values if he wasn't going to live by them. He needs to go