Keesha Is Smarter Than I Give Her Credit For 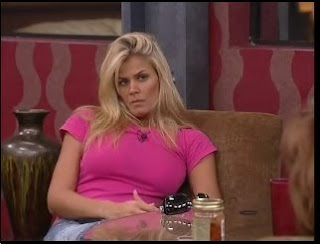 The minute Michelle was out the door, Keesha set the record straight with Renny.

Keesha: She is trying to get April and Ollie to stay here, and Memphis and Dan out. She is throwing Memp under the bus. I am telling you - Michelle, April, and Ollie are always talking downstairs, whispering. I'm telling you! She is trying to get Jerry out. I know what she is doing. She is trying to save April and trying to convince me to keep April. That would be stupid, I would be the first one April will go after. I am all wound up. I know what she is doing. Because Michelle has a deal with April and Ollie, and saying that Dan and Memphis have a deal with Jerry. I trust Dan. I don't believe Michelle. Dan tells me everything!

Renny: I trust Dan so far. To a point.

They're now interrogating Dan. He's trying to reassure Keesha and Renny that he's on their side, and is telling them about both Jerry and April approaching him earlier today. He can tell something is up, though, and tells Keesha that he can see it in her face.

Hey gang! I made a weird discovery today, totally by accident.

I found that when I stick my thumb up my cat's ass, he sounds EXACTLY like Keesha!

She's not stupid, Scott! Apart from certain airhead comments (which we all make at times), the Keesh is fairly savvy in this game. Minus the week she was HoH. I think she's learned from it, though.

Her week as HOH was a tragedy. She allowed April and Libra to think for her, and where did it get her?

Beijing police reported today that a man severed his legs, an arm and finally, his head today outside a large Olympic stadium. Police said it was a political demonstration known as Chopped Suicide.

Remember when she was HoH and we all thought Jesse had her convinced to keep Angie? Then as soon as he left the room she flipped right back - my guess is she is just VERY good at letting the other person do all the talking - kinda like Ryan was last year.

And - look now - who has replaced Angie as the favorite girl with Dan and Memphis? Seems like Keesha played it very well.