We Knew This Would Happen - Jerry Approaches Dan 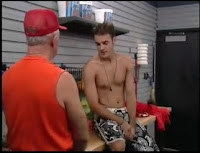 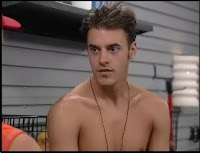 Jerry apologizes...and then goes on to talk about how hurt he was by Dan's betrayal. He once again reminds Dan that he "saved" him last week. But his Judas comment wasn't "hateful"; he was just pissed. "If you guys keep me, maybe we can have another alliance." Yeah, that's going to happen.

Suddenly, Jerry has liked Dan from the beginning. At least Dan sort of responds - "It's not fun walking around somebody who is mad at me."

Here's some more of their conversation:
Dan: How do you feel about this week?
Jerry: I feel that I have a good chance because April has built a bad situation and I kept my word last week. And now I'm alone. I'm counting on your side. I'm going to have to protect you guys if April goes in next week.
Dan: The HOH comp - I picked you because you said that. If you wouldn't have said that, I wouldn't have picked you. But you made it easy.
Jerry: I knew that. But I'm hoping I can count on you and Memphis this week, because Michelle disowned me. If you guys keep me, you've gained another alliance because Mich is still strong.
Dan: I didn't take it personally because we did have an alliance.
Jerry: It hurt me deeply. It would have been different if you would have told me or asked me to go with you to show some relationship. I still like you. You are just like one of the kids
Dan: I hope when we get out of here we are cool.
Jerry: I'm a street fighter. It hit me hard; it was nasty. I was wrong, for that part of what I said, I am sorry.
Dan: I appreciate it.

Isn't that nice. Jerry is obviously feeling truly remorseful for his bad behavior and is saying he's sorry. I never expected that. (Okay, now since you can't hear me, I said all that in my deeply sarcastic voice)

He's going to have to protect them, eh? LMFAO.

Yeah, that's my favorite part. Jerry is going to save both Dan and Memphis from mean ol' Michelle? Unbelievable.