All Is (Finally) Quiet 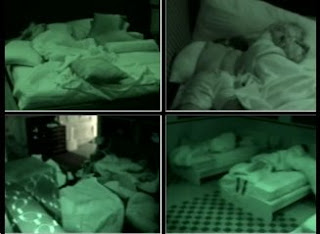 It was a late night for the crew, and I have to hand it to Ronnie. After hours of claiming that he did not switch his vote, he's established a bit of doubt in the minds of Casey and others. Most of the evening was spent with his new jock friends, though, which should be a clue where he really stands. Hell, compare a note or two and everything should be clear.

His ego could really be his eventual undoing, as he spent most of the night slapping himself on the back. At one point he even claimed he's going to make people forget Dr. Will.

Unless he really is playing the jocks, look for Casey and Laura to be put up.

One more little tidbit - Jessie and Lydia are sharing a bed, with Natalie sleeping on the floor next to them.

What is Natalie....a Pilot Fish?

But I seriously can't wait until nominations.. sparks are going to fly when people notice Ronnie is screwing everyone over.

LOL I love how Natalie and Jessie flirt with eachother, yet Natalie says 'she doesn't like him', yeah right.. why would you sleep on the ground next to Jessie and Lydia. o_O

I find it very hard to believe that the psychologists who picked these contestants chose two, both Lydia and Natalie, who seem to NEED male approval. I feel bad saying it about Lydia b/c I want to like her, and I do, and I mean no disrespect, but she has very, very low self-esteem. It makes me extraordinarily sad. Distant, emotionally unavailable cop-father much? Notice that all her tattoos, it seems, have faces, as though she wants to distract from her own face from shame, or wants to wear a different face.

And Natalie hasn't been called on her lying about her age in any real way. She seems like this tough little firecracker... but she's sleeping on the FLOOR next to Jessie's bed like a dog! These are some needy people! Jessie is not going to fill the role. I think he is attractive to these two women because he is such a blank canvas and they are able to project on him their own fantasies. In reality he is a delusional, self-absorbed, narcisstic body builder (I repeat myself) who, no doubt, has some sort of problems of his own. His muscles are as much a covering of himself as Lydia's tattoos.

This is all very troubling.

Dr. Will? More like Norman Bates creeper style. EESH!
When will geeks ever learn that they are geeks and therefor will never, ever be accepted by jocks, in or out of high school? Never shall the two intermingle.
Nat on the floor is not only pathetic but truly humiliating....like a dog is right!
Ronnie will burn but by what group is the big question?....I hope it's a gang bang from all directions or at least the worst wedgie ever for him!

From what I have seen so far today, Ronnie has told Russell he is gonna put up Linda and Casey but then tell only Casey that he is the pawn and he doesn't trust him. If he doesn't make a stink he said he will then know he can trust him but if not he can go from pawn to target . This guy is creepy and plays with play do.


Natalie has no thoughts of her own. She quickly takes on whatever personality is needed to survive. Sleeping on the floor next to the bed is humiliating.

i trust nothing what comes out of Ronnie's mouth. until the votes are in i wont believe anything

Tell me Irish why is it so humilating. Natalie and Jess has a sibling kinda of relationship. they do more stuff like wrestling and playing games. Why would a sister brother relationship require the sister get mad because the brother is getting a little snatch.