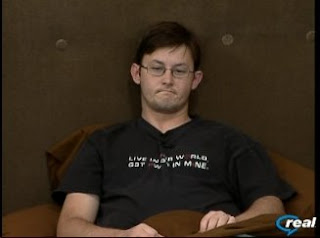 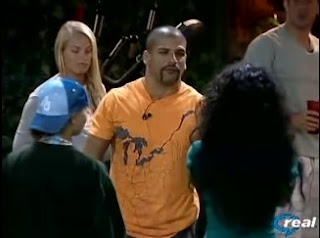 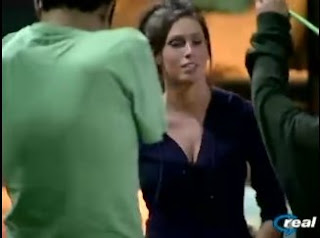 So I went to bed about halfway through BBAD last night, bored to tears by Ronnie's "advice" to Laura. What a mistake.

Basically, Ronnie's house of cards tumbled last night. People (finally) began comparing notes, which led to the confrontation of the year. So much happened that I highly suggest just going to Real and watch it all unfold.

Edit: Ok, I've gone back and watched lots of footage from different cams. The entire fight actually starts about 11:15 or so, right after Laura left the HOH. Chima, Natalie, Ronnie, Lydia, and Kevin began arguing about how Russell should have been the replacement nominee. Natalie and Chima, in particular, get into it.

Lydia then goes off and complains to Russell how Natalie acts like she's in charge. Russell smartly plays into it. A few minutes later, Russell pulls Ronnie into the storage room and advises him to settle down and not act so paranoid. This conversation gets heated, as Russell calls him on talking behind his (and everybody else's) back.

A few minutes later, almost everybody is in the backyard, and Laura wants Russell and Ronnie to come out to tell everybody what she has said or not said. Russell and Jordan jump in, but Ronnie refuses to answer to them as the conversation is expanded to all of Ronnie's shenanigans.

Ronnie retreats to the HOH with Chima, who points out that what he's saying should be said to the entire group. They're all yelling for Ronnie to come back out, and finally he screams "you're the one going home" to Laura before slamming the sliding glass door.

They're ALL now talking shit about Ronnie, except for Lydia and Jessie. Ronnie attempts to chat with Russell, who calls everybody into the house to listen to Ronnie claim he hasn't lied to anybody. An exhausted and defeated Ronnie retires to his room, as the rest of the crew continue to make fun of him for the next couple of hours. Yeah, they're a bit full of themselves, and I don't necessarily believe that every single one of them would put him up if they win HOH on Thursday.

hahahahahahahahahaahahhahaha. so the entire house (with the exception of Jesse and Nat) plan to evict him next week. yeah he really did become that game changer he talked about, good job uniting most of the house Rattie

I missed it live but I am continuing to watch all of it now. It makes me so happy that his world imploded. If he spoke less he could have gone far. He manipulated 12 people but couldn't shut up. He constantly had to talk strategy and wield his HOH power. It is hysterical listening to these guys compare notes. Hopefully they don't screw this up and let Chima or Michele win HOH because then he is safe.

LMFAO@ U Reefer.... where do you come up with all this crazy stuff.... give me some of that killer weed(lol)

Watching the live feed now. Russell is sleeping on the bench outside Ronnie's door. Ronnie is scared. I am itching to see how he is treated today.

Flashback edits nothing out.

CBS controls the feed leaving the studio. Real has what you see and you can replay exactly what you saw the 1st time around - warts, nudity, and all.

Every chance you get to talk down the people you dont like, you simply lie. You really should be in the house dude because you do know how to be bias and lead people to think the wrong thing

You're right - I'm not a Chima fan, but the passage you point out was not intended to be negative towards her. Call it a poor choice of words that I will immediately change.

Seriously, I don't care who others like or if you agree with me. Nor should you care about my opinions. Everybody has their own views on each HG. I just find it amusing that you (if it is you each time) keep on claiming that I'm championing certain people that I've actually had very few kind words about.