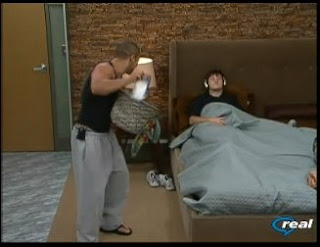 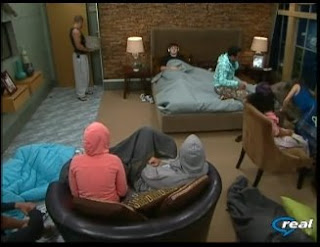 Every Thursday, the houseguests are forced to spend a couple of hours in the HOH while the crew gets the house ready for the live show. It's always uncomfortable for everybody, as it's quite often the only time the various alliances intermingle.

Today's gathering may be the most uncomfortable of all time, as Ronnie is forced to be in the same room as most of the cast for the first time since late Tuesday night. He's decided to pretend they're not even there, slipping on the headphones to listen to his awful Legally Blonde cd.

Russell is making a show of attempting to bother him, but since we've seen him sneak in and out of the HOH the past 24 hours it's not nearly as entertaining as it was on Tuesday.

We know Russell is talking with Rat Boy. That means Jesse is aware of it. How many others know?

Russell has always been on Ronnie's side ultimately. He allegedly plays along with the house. Jessie says he's still on Ronnie's side too. They can probably get Natalie on that side too, which gives them four votes if Ronnie doesn't end up/gets off the block next week. They need five for a majority. (It'll be eight people voting next week.)

This is a weak cast with strong negatives.

If Laura leaves tonight, it's possible the show could see a drop in interest.

If the Meathead Factor completely takes over the house...who will want to watch?

BBAD is tough to watch right now. I am doing lots of fast forwarding.

I agree with Jello on that comment. The majority of the cast are weak. I know if certain people leave I will most likely lose interest. In this season.

I'm loving this season so far just because they are all playing so hard. Can't get rid of them all so the hard play will continue.

Its like no one can trust anyone right now.

Imagine this - Jesse wins HoH - nominates Ronnie and Casey - all the 'honest' players think Ronnie is out the door and then by the vote he is saved - can you imagine that place?

I really could care less who wins - I just love to watch all the scheming and sneaking around.

I agree Mike with 1 exception. I can't stand Rat boy. All he does is talk game. Even Jesse and Russell hate that part. Other than that, I could care less who wins.

i think russell's talks with ronnie are being pushed by cbs and i would bet we see it on tv tonight (a brief spot on the whole house ganging up on him and russel coming into his room). it just seems staged to me because he knows ronnie was trying to get him out. he's just trying to stay on his good side so he can keep in the loop with what ronnie and jessie are planning. i hope none of the athletes get hoh so one of them can go this week (other than jeff)

Mike, I want to be like you. I want be able to not root for a side and just enjoy the game. But I dislike soooo many of the people. And Laura is probably the best player but is out today. It sucks.

Also, my bold prediction is that Russel will make it to the final two. The clique twist will keep him in for a while and he is capable of winning when he needs to. So by the time it gets down to 6 or 7 in the house, people are thinking final two, and since by then Russel would have exploded on everyone, He will be hated by everyone. So everyone thinks that they should take him to the final 2 for an easy win. He will probably only need to win 1 or 2 POVs and he will be golden, and a HOH or 2 are also possible for him.

If (when?) Laura goes in just a bit, I'm done with the show. Just don't care about this cast of misfits...

Jesse set this whole thing up. He pulled in Natalie and Lydia first and Russell last. I posted about this earlier... They are working on Chima and Kevin now but so is Casey so who knows whats going to happen... I do know Kevin and Chima wants to put up Atheletes and lydia likes Jesse so you know she is thinking different