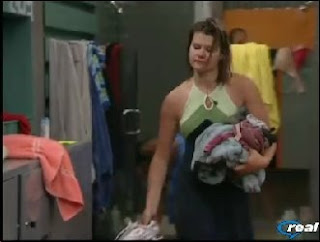 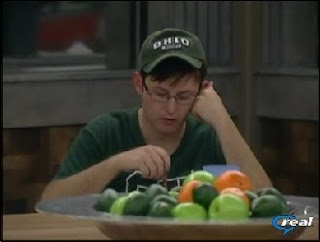 Michelle apparently won POV, but poor Chima now has to wear a leotard all week. Despite my critics on this site, I do feel sorry for her.

Meanwhile, Ronnie is eating alone...again. Is it possible I'll start to feel sympathy for him?

Edit: Ok, it's a bit unclear as to the booby prizes. It sounds like Casey has to wear a "banana suit", but it's still unclear about Chima's unitard. At first, it also sounded like Natalie won $2500, but she was the host. It's actually Jessie who won the money. The house also won a margarita party, which the "have nots" cannot attend.

One (hopefully) last edit: No leotard, and apparently Michelle also won a trip.

it was nice knowing casey

Seems Natalie won 2500$. They are having some kind of margarita party and the have nots can't go.

Natalie nestled in that pool of mong that Lydia & Jessie left after they did the nasty.

Can she get a yeast infection from that?

Casey is the one who has to wear the Banana suit unitard, not Chima.