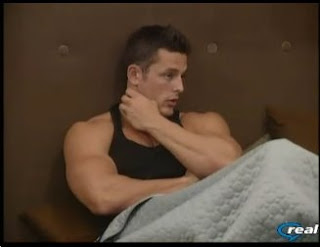 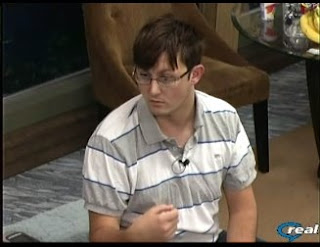 Everybody has to come up to pay their respects to the King, which is a fantastic way for Jessie and Natalie to gather information. I swear these people can't wait to spill their guts about everything.

They're also all backing down from demanding Ronnie get nominated, which Jessie is now telling Ronnie...sort of. He is informing Ronnie that he's the only HOH which wouldn't put him up right now (except for his sidekick Natalie, who quickly adds that neither would she). But he's also grilling Ronnie on all of his earlier misdeeds, babbling over and over the usual variations on the "action speaks a thousand words" cliche.

Casey's definitely going up, and mainly because he tried to put the athletes on slop.

I'm already at the "who gives a shit" stage. I can't dump Showtime because I don't want to lose "Weeds," but I won't be tuning in to watch BBAD anymore this year.

Too many lamers in this cast. Even Eric is a bore. Most boring gay guy that they've had. He doesn't even seem to have any fashion sense. Casey dresses like an eleven year old black kid and speaks fluent cracker. Chima has been violated in the worst way in life so she is an angry trainwreck. Lydia is a paycheck away from suicide. Jordan is dumber than a snail. Michelle is neutral but she's married and into butt plugs and willing to tell the world about it. Natalie is unattractive and irritating. Russell is a vain meathead like Jessie. Jeff seems like an OK guy but he is obviously into terminally dumb chicks. Ronnie is like a blob that sits around eating Pringles while he reads religious fairy tales. This is not the best season of BB for me. It got off to a bad start the SECOND I saw that Jessie was back.

I agree with most of what you said but it is also early. I mean last wek was pretty good for 2 days ( rat boy getting caught). I will stick with it till Jordan gets the boot. After that I will just check here for updates to see if it's worth tuning in again.

BTW, Showtime rocks. You have a new season of Dexter coming as well as Californication and Brotherhood.

Don't you really mean he has Lydia's fingers wrapped around him? :)

But - casey is a backdoor target - not the 1st nominees unless Jesse changed his mind and I missed it.

And I assume reefer meant Kevin - not Eric ;)

I did mean Kevin and not Eric. That shows you what a lump that guy is. I've already even forgotten his name.

CBS has to send Evel Dick or somebody into that house to give it some zoom. This is pretty early to be on life support.

Are the nominations happening already? Why is the feed down? Food competition? Just wondering

It's not just King Jessie but also Queen Natalie!! I can't stand her! I dont think I'll be tuning in as much this week! I can't stand watching them gloat!! Things definitely need to change soon or this season is going to be a flop for sure!!

Well the brains lost the " Have and Have nots " competition and looks like they are on cabbage and cocktail franks from what I can tell. It isn't slop.

Reefer Jello if youre already in "who gives a shit" stage, why dont you just leave, go away or something. No one really cares which stage youre in, we just dont want to keep listening to you whining each and everyday.

I hope youre a female, if not, youre the biggest bitch guy that ive ever seen

The Brains are on slop - but they can also have Cabbage and Cocktail Weenies. Michelle is making cole slaw (sp).

There's no way cocktail weenies won out over the other way worse options. I smell a fix!