Who Has The Most To Lose Tomorrow? 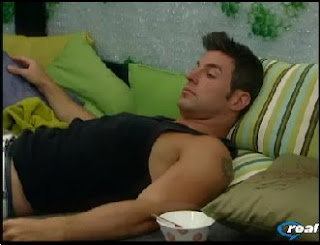 Last night, it was announced that tomorrow we'll see a twist that will "change the game". Odds are that this means the end of the "clique twist", although I could also see the return of another former HG. Remember that there were plenty of rumors when this season began that other former cast members were going to be involved in this season...which obviously could just mean more cameos like Dan's hosting of the "have/have not" competition two weeks ago.

This got me to thinking this evening (mainly because there's nothing worth watching on the feeds) - who has the most to lose if the cliques are dismantled? I would say Jeff would be the person who would go from being one of the safest to being a person who would probably find himself a main target.

Jeff has the capabilities of being a force, although he hasn't shown a lot so far. He's very lucky in that the people who want him gone the most are his teammates - Jessie, Natalie, and Russell. As long as he's paired with them, he's relatively safe. Chima is the only other person who has explicitly said they want him gone, but her chances of any HOH victory is slim unless it's a game based on luck.

Even if Chima were to nab HOH, it would all depend on how the winds are blowing for or against the other nominee. The other non-athletes all have their own targets - I think a number of them would go after Natalie and/or Russell (both of them will inexplicably be targets before Jessie).

If the cliques are dissolved, though, I can almost guarantee that the rest of the athletes would immediately seek to oust Jeff. Suddenly, the numbers change to having half the house wanting him gone, and his only remaining ally would be Jordan (which isn't exactly reassuring).

Who do you think will be most affected by the dissolution of the cliques?

Endurance HoH competition on the live feeds this Thursday! Click to get a three day free trial of the BB11 Live Feeds so you are ready when it comes on right after the show!

I think Jesse is the one to lose the most with the cliques. He has been in charge twice and everybody else at some point has said that his little alliance is too strong.

As long as one of his true alliance ( Russell, Rat Boy and Natalie ) don't get HOH, they could put up Jesse and one of the others and they wouldn't have the votes to save themselves. The others would have the numbers and call the shots fr that week.

I agree, Depending on who wins HOH, you can make an arguement for either Jeff or Jesse that has the most to lose. I dont think Ronnie is totally out of the woods either. There sre several people that will go after him if Jesse and crew are not in control.

i'm with you guys, it all depends on HoH. without the cliques jesse and jeff are targets and so would ronnie. i'd love to see dummy win it, just cause i wanna see the chaos it could cause

Michele definatley has the most to lose. She is just starting to get in with the Main Alliance, but once the cliques break up, Ronnie and Chima will have NO use for her and the strongest players in the house will be gunning for her.

Michelle's in trouble no matter what. Look how Lydia and Kevin tried to set her up last night.

Actually, it would be a smart move to keep rat boy. After all, if he made it to the final two, who is going to give him the money? He's a perfect placeholder and lightning rod, and too cocky to realise he's being used.

Russel I think already has that figured out. Anyone who wants to put him up isn't thinking long term (although seeing him back-doored would have a certain charm).

I THINK MAYBE SINCE JORDAN IS THE ONLY CLIQUE LEFT AND NOT FAR SHE MAY BE MOVED TO ANOTHER CLICK OR MYABE SHE HAS TO CHOOSE ON THE SPOT IF SO SHE CAN PICK ATHLETES THEY WILL BE 5. OR IF SHE DOES PICK ONE WILL HAVE TO OFF A CLIQUE AND GO TO HER POP ALONE CLIQUE WHICH SHE SHOULD CHOOSE RONNIE THEN HE CAN BE BY HIM SELF

I really don't see Jeff as a target right now - he hasn't done anything - just hung out with Jordan, for the last week. I'd say Russel or Natalie might have the most to lose once they lose the umbrella of the "Athletes" (assuming it is removed).

They have to do something. I'm getting sick of watching. I can't believe they even thought that bringing back Jesse was a good idea. No one liked him in the season he was originally in. With 10 seasons of Big Brother why they thought that people would want to watch Jesse again is mind boggling. I can't stand the sight of his big muscled small brained self. He makes me sick.

I agree, Jeff is in the most precarious position if the cliques are gone. The jocks would have voted him out instead of Laura if they had that option.

This is why it is important for him to keep his stronger (play wise)ally Casey. Jordan is not going to be a good player to go to the end with, she just doesn't have game. I don't think Russel is as tight with Jesse esp since Jesse has chosen to believe Rat boy over him on more than one occasion. Now is the time for Jeff, Russel, Lydia, Kevin and Michelle to team up against the others side keep Casey and switch the game up, even before CBS does it. Wake up hamsters... start thinking game!