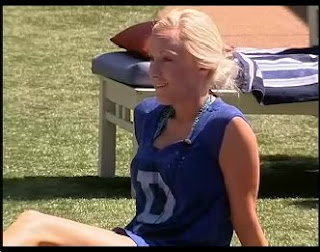 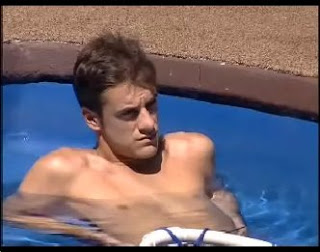 What a difference a week and a Veto win can make, huh? Earlier, we saw Jerry apologize to Dan for his actions and vow to protect him- I'm still giggling about it. Now, April's pleading her case to Dan. She's done nothing wrong in this game, kept her word, hasn't personally attacked anyone the way Jerry has Dan...the list goes on. Reiterating her rant with Ollie last night, she feels that Dan's dignity would be in question if he voted to keep Jerry.

Great way to win him over, April!

She and Ollie are not in an alliance, they're just close in the game. Yet, she can see herself marrying him and would never turn on him. If that doesn't smell like an alliance, I don't know what does. She also tells him that apart from Ollie's vote, she could get Manchelle's if she had his vote as well. That admission is not in Michelle's favor, to say the least.

About a minute ago, Renny asked Dan to join her in the HoH room for a little chat.

I saw them talking, Ale, but I just couldn't bring myself to listening.

I know what you mean. But like with Jerry, I take interest when nominees eat their words and grovel for votes.

Conspiracy theories with Manchelle...again. Have the two guys struck a deal with Jerry behind the girls' back? They'd rather go to the end with Jerry. Perfect alliance. Stupidly, Renny and Keesha are seemingly eating it up. Ugh. This could be a roundabout way of pushing for Jerry's eviction.