Big Brother pulls out the games. 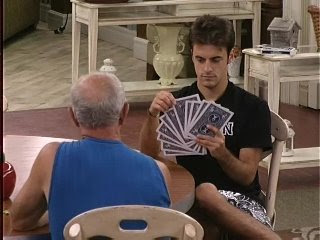 Yes indeed - when you are down to 5 people thing start to slow down a bit in the Big Brother house. So last night the guys got a few items to play with including the box of questions they have used in the past, some crafty stuff that looked like it included pipe cleaners, and some oversized playing cards that may be amusing to see on the show for about 5 seconds.

I have seen nothing to indicate that the plan is any different than it has been. On Monday Memphis will probably use the POV to save Dan which will force Jerry to nominate Renny.

Speaking of Games - there are a few more details about the POV game that was played. From the sounds of it BB took baby pictures of the HGs and combined them - so the HGs had to guess the combinations. As Ale had predicted, it was a variation on the HG face morphing contest. That will be shown on Tuesday.

after the double eviction BB should do another double cause the game slows down to much to enjoy. two doubles and final three week and thats it...end the show already.


watching these people do nothing sucks

When will they tell Renny about the Hurricane?!

To those that are still unhappy with the site......

I would ask that you do us a favor and stop complaining about the comments.... we remove those we feel are out of line when we see them.

If you think we are not being fair - or are not acting fast enough for your satisfaction - then you might want to stop visiting.

Complaints in the form of comments just mean all the more comments we end up deleting.

As far as the hurricane... chances are unless Renny's family is affected directly (as in injured) they most likely won't tell her - I am trying to remember if they even mentioned Katrina to the HGs when that hit but unless it was very near the end I don't think they did.

So...a poster has been attcking me and making false accusations against me and you delete MY posts in defense of myself. That's great Mike. Nice job. You are now ready to move to Red China and begin your new job as state censor.

Have they told Renny that a devastating hurricane is headed towards NEW ORELANS?

If you think we are not being fair - or are not acting fast enough for your satisfaction - then you might want to stop visiting.

OK Mike...if this is the way you play, I will comply and stop visiting this site. Nobody wants to post on a site where you can be attacked but cannot defend yourself. I'll just hang out over at Morty's BB site which is faster and has info more quickly.

Black Ohio, I don't think any of your comments have been deleted. I took out a couple of that other person's yesterday, but I didn't touch anything you wrote.

Indymike removed each and every post I put up here today. Is Indymike capsanon ROFLMAO at all of you?

Here's what I see here...I get attacked and the posts stay up. I defend myself against this person and my posts get deleted. Ain't fair so I am moving on. I don't want to be the problem here.

I was over at Jokers last night, reading the live feeds and I really enjoyed reading about that game where they ask questions and everyone has to give their answer. I felt like I learned a lot about the houseguests through that. It gives them something to talk about other than the same tired topics. So thanks BB for giving them the games.

Yup - I deleted his posts earlier.

Just for the record.

LOL! This website cracks me up. It's a Kamikaze site. First you run off all the anonymous posters and now you are running off the registered posters? How crazy is that? Please resume speed. The people that run this place have to be nuts!