Dan And Keesha To Go Up? 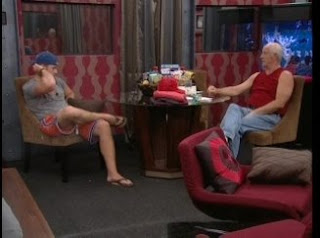 Jerry's up in the HOH with Memphis, and has told him that he wants to work with him the rest of the way. He says he plans on putting up Dan and Keesha, with Dan his target. Memphis is supposed to "play like hell" to win the veto, but not to use it.

Who is Jerry kidding? He's fried next week, no matter what he says or does this week. At least, I hope so. If not, I'll eat my hat. I'd have to buy one first, but oh well.

Yeah, and Memphis is right as he's telling the others that Jerry is looking too far ahead.

I agree ale, Jerrys gone next week either way he goes. His best chance is with the gurls because they may crack, them boys will stay strong together

OMG, listening to him talk about jury votes is unbearable. Even worse is his explanation why siding with Memphis, Keesha, and Renny was a mistake.

But the gold medal for annoyances is Jerry's constant need to hear that he's so great.

One thing for sure, jerry is going to piss that whole alliance off and everybody in this forum off for a whole week(lol)

He's just a really annoying guy. Never mind that he won, or which "side he was on." I'd still be just as annoyed with him because I just don't like the old fart!

poor memphis having to make a deal with the devil. ugh! i don't blame him one bit. man's got to do what he's got to do. it's down to the wire and there should be no more alliances.
say what you want about the 4...they recognize jerry has them by the balls right now.
dan may go this week unless he wins the pov. jerry told memphis renny would be his next target...either way it will be dan or renny gone this week
...IF we are to believe jerry really wants to go to final 2 with memphis.
all i know is it's only the first day and i am already DEAD SICK of jerry and his talking...about himself and his family and his almighty power he has
it's going to be a long week no doubt!!!
p.s. jerry you don't get to play next week and i hope you know your toast next week!

Calm down Ale, we all will be old one day and someone will call us a old fart(lol)

As I said from the beginning, Perc, at this point I don't care who wins. I just wanted Michelle out, and thankfully that happened. What sucks about Jerry winning HOH, though, is that we now have to endure his lengthy, nonsensical stories and analysis.

As long as there is always a feed that ISN'T on him, I will be content. My 80+ year old grandfather would be hella more fun to watch than Jerry, that's for sure.

Well Scott it was either that or nothing at all going on... Wouldnt even been worth watching... At least now, we can share the hateraid(lol)

And Ale to be honest with you, most 75 yr old people couldnt have lasted thru the bb house and you know it. I mean every body has some good and some bad...

Give Jerry his due... he survived something that a lot of us that are in this forum right now couldnt do must less a 75 yr old man

Im not a fan of you Jerry but big ups to you old dude for hanging. No one can never take that away from ya