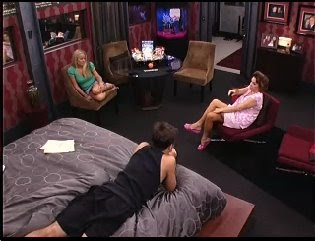 Renny and Keesha are up in the HoH, and at this point, they're the only safe members of Dan's alliance. Memphis is freaking out, almost certain that he's going to be nominated. He seems to be right, as Dan has the ladies up in his room to ensure that they'd vote to keep Memphis. Renny is taking this opportunity to bash Memphis to the others, letting them know that she doesn't trust him and wants him out. "He's a piece of shit...he hasn't done shit for me," she says. Dan is trying to ensure that they can secure an alliance of 4, the three of them plus Memphis, to be certain that Memphis would have the votes to stay. He wants to keep Memphis as part of the 4, and cut him loose once they get the "others" out. Renny's doesn't seem to be biting, but she did say that she'll do whatever Dan wants her to do.


Dan also said that he'd be willing to go back on his promise not to put up Michelle after the Veto. Judas strikes again ;)

I can't get myself to endure the Ollie/Michelle/Jerry side of things- it's too early in the day to put up with it.

I am surprised Dan would put up Memphis...isn't that who his main alliance is with?

I'm confused as to what dan is doing/thinking!? Why would he make that deal with ollie in the first place? So ollie is essentially running the house this week, he just doesn't have the room?!!!! That was the stupidest move in this game so far imo. Dan will be so gone next week if anyone besides keesha or maybe renny get hoh. I'm sorry but he has shot himself in the foot this week!!!

Hes Judas remember.. Maybe Jerry was right after all. at any point hes pissing america off so im more than pleased

okay i realize dan felt her needed to make a deal to win hoh last night. it was stupid and bad game play (i think) but why of all the people in his alliance does he feel he needs to use memphis to put up? if i were memphis i would want an explanation as to "why me?"
oh never mind...ollie just said he wants memphis up. i forgot...ollie has all the power this week during dans hoh!! oh and now ollies making sure dan does exactly what he wants...making sure things are clear. OUTRAGEOUS!
dan better have some MASTER PLAN to get out either ollie or michelle this work or his name is mud to me.
wth is rennys problem with memphis? she sits in hoh with d and k saying how she doesn't trust him and hes treats her like shit blah blah blah! did she ever stop to think that the reason memphis is sketchy is because of renny's attitude toward him? i mean, that woman can give off some bad vibes not too mention the things that come out of her mouth can be pretty harsh.
she says she doesn't trust memphis but who can trust anyone in the game? renny even said she would take out memphis first chance she could...and she knows he would do her that way. if i were dan i would be more worried about renny then memphis at this point.

Ollie may be able to have Memphis put up, but he doesn't have the power to get him out of the house. Even if Michelle stays off the block, and she votes to evict Memphis, there are Keesha and Renny's votes to consider. In that case, Dan can be the tie-breaker. People have to realize that they were going to have to put up their own alliance members eventually, it's just a matter of making sure the "right" person leaves. If either of them win the Veto, Dan would be willing to put up Michelle.

Dan is friggin' nuts, and here I was hoping that either he or Memphis would win HOH. Why did Dan make a deal to keep Michelle? That was so stupid. Unfortunately, it looks like Memphis is leaving next week since that PSYCHO BITCH Renny will push hard as hell to get him out when he's nominated.

everyone is getting excited for no reason. Wait until after the Veto to go crazy. Right now it's all talk. no sweat. either Jerry or Manchelle is going home. if Man wins POV and takes Jerry down? say good bye to Ollie. Promise or not.