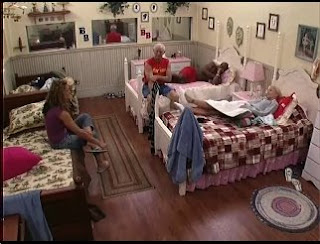 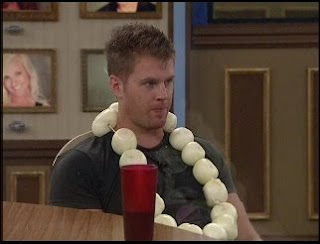 I did chuckle when Jerry, April, and Ollie were laughing about the fact that Libra was in second place AGAIN. What is that, like 6 times now? But overall, Jerry is way too full of himself for winning the veto. He thinks when the "crowd" sees his victory, they'll cheer.

He also still won't let go of the Dan vote. "Dan will always be a Judas in this house to me, that motherfucking cocksucker".

In the other room, Memphis has pointed out that April should be able to drop the fact that he has won a car now that she's won ten grand and a shopping spree. Good point, sir, but something tells me she never forgets.

WOULDNT IT BE FUNNY IF DAN WON HOH AND PUT JERRY UP ON THE BLOCKS... I WONDER WOULD HE CHANGE HIS MINE AND START TALKING TO HIM THEN

PS: HE JUST MAD BECAUSE HE DID ALL THAT TALKING TO APRIL AND THEM THAT HE HAD DAN IN HIS POCKET.. MADE HIM LOOK LIKE A FOOL YANNO