Memphis Attempts To Talk Some Sense To Dan 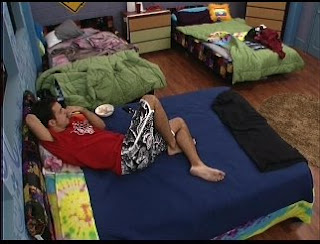 Keesha has made sundaes for everybody not on slop. After she brings them into the bedroom, Memphis and Dan continue to talk about the veto. Here's some of the conversation regarding April and Ollie's offer to buy her way off the block.

Dan: You have to weigh 5 g's versus 500 g's but the end is a long way off.
Mmemphis: I agree.
Dan: I will say 5 grand up front and you can't put up me, Keesha, or memphis next week.
Memphis: Yeah, but then the next week.
Dan: I don't wan too get involved with Renny, ever.
Memphis: We lose Keesha if we go against Renny.
Dan: If we make a deal with Ollie..
Memphis: No, he is worthless.If you keep April, Keesha will not talk to you.
Dan: Keesha may be worth more than 5 g's.
Memphis: Michelle will come after you if she is put up because of a deal.
Dan: She is emotional. I don't want to hear about Jessie any more.
Memphis: If she went up as a replacement..
Dan: What if she was not around?
Memphis: No one would vote her out over Jerry.
Dan: I am trying to get the 5 grand AND keep Keesha safe.
Memphis: You're talking likd Renny at this point.
Dan: Michelle and I are neutral. Would she put me up?
Memphis: Talk to her; I am not sure. Make it part of a conversation - if she says I don't know, then she might. Feel her out.
Dan: Why does she want April to stay?
Memphis: She thinks there is a deal betrween Keesha, Renny, and us.
Dan: Said any chance of that is done due to Renny.

Now Michelle is in there talking nonsense.

What I don't get is why he's so hung up over the 5G if he's got 20G in his pocket already.

Also, Manchelle is overdoing the baby talk tonight. I seriously can't stand it. I thought she dealt with that speech impediment she had in grade school, damn.

I am right there with you on both points ale....

Keesha and Dan were having a decent convo and Micheel had to interrupt it!

Michelle has been interrupting conversations all night tonight. And it's not just the babytalk that gets me. She's one of those people who have to recreate entire conversations when she tells her awful stories.

Well, we can't say it enough. Manchelle is an idiot. On a positive note, Dan seems to have calmed down considerably since he began "thinking."

For those of us without the feeds, Ale, could you elaborate on what you mean by Dan having 'calmed down'? Does that mean he's no longer seriously considering using the veto? Or that he seems to be losing some of his enthusiasm for the idea?

He went up to speak to Renny, and I think she put it in perspective better than anyone else. She reminded him of the number of enemies he'd have if he did take money in return for the Veto, and the he's put too much effort into rebuilding trust with people in the house to let it all go for 5G. He agrees, saying that the money is tempting, but he's in the game for more than 5G. Renny tells him that a move like that is not worth that amount, and he agrees.

It's safe to say that he's no longer considering using it, both for his sake and those that he's aligned with. He told Renny he hopes that by not using it, he can show her that she can trust him.

I feel bad for Dan and Renny, which ever side they clutch to, the stronger side will knock out the toughest competitors on the other side and then wipe them Dan and Renny out. With that being said, probably the keesha/memphis side would be the safer bet because michelle/april would be much better at knocking everybody out. You do have a chance at beating memphis/keesha who having one but 1 time between them.

Lets face it, both sides know they dont have a chance in the jury house against Renny and Dan and they will get rid of them right after they get rid on the oppositions toughest people

Thanks for the info, Ale.

I'd Just Like To Say Hello To My Uncle!

poor dans a damm fool, he dont take the money to protect others and they will be the ones who put him out the game... stupid move you ask me.. i would take the money and forget about whos mad at me

Feeds are back, Dan did not use the veto

April cornered Dan in the spa and is now stumping for HIS vote for her to stay.....

The suggestion that Dan is a Catholic "caveman" is ludicrous. When I watched his press interview with Diane (BB5), I really didn't think I'd like him at all. He came off obnoxious, sexist, and completely ignorant. I don't know WTF happened to him, but his time in the house has definitely proven that he is none of those things, and that he's much more open-minded than those interviews made him out to be. I don't know if it was being in the spotlight and being egged on as a controversial persona in the house, or what...but I think we can all agree that the Dan in the house is a complete flip from the Dan in the press interviews.

Those things have nothing to do with his game-play abilities, though.

Wow Ale! I am surprised at your comments. I saw his BB intro video and he clearly says that he doesn't believe that women are equal with men. By the end of that tape, my wife and I both hated that little rat. I wouldn't say he is a caveman like was said on here but he certainly is not an enlightened guy. He's a right wing punk....IMO.

I'm totally acknowledging that he was an asshole in those videos, no doubt. But from what I've watched since the start of the show, and it's been a a lot, he's either doing a really good job of keeping his inner asshole from coming out, or he was just blowing a lot of hot air for the cameras in those vids. I just haven't seen him act in ways that amplify the comments he made in that video, that's all. If I'm wrong, well...then I'm wrong.

Interestingly, the ladies are now talking about how JERRY looks down on women. Mhhmm.

Do you think that his press interview was his attempt to present himself as being an obnoxious jerk in the house as other past guests?

I don't put too much faith into those pre-show interview tapes. I think they're encouraged to provide sound-bite type lines, and many people also make the mistake of thinking that they can portray themselves as a character in the house. The only people that have been able to do that for more than a day or two were Dr. Will and Boogie.

Yea, he definitely tried to come off as a bad ass mastermind. Failure on both counts, imo.