Oh No! Jerry Has Entered The Discussion 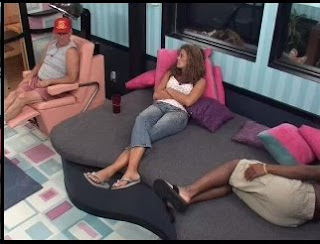 Apparently, the diary room has encouraged them to question Dan about whether he's a plant. This is why we're continually seeing the cams go to fish.

Before Jerry walked in, though, Ollie said that the reason Dan made such a big deal during the HOH competition about seeing Monica was so they'd see the "phony" picture. Michelle is now pissed that she was put up instead of Ollie. "It just doesn't make sense." Yeah, right.

I wish they would stop talking about production so they would put the feeds back on. Tonight is priceless and totally worth the cost of live feeds. Ollie is like school in summertime, no class. He showed that when Manchelle won HOH and he reaffirmed it today with his temper tantrum.

aww...but don't we all love temper tantrums in the BB house???

Great analisis mark... report to te front desk and get you prize for being stupid..lol

this forum is not about race it is about a fricken tv show. Ignorant people that make comments like the ones here are the problem with this society today. Grow up.

I WOULD LIKE TO PERSONALLY PUNISH MICHELLE... FOR BEING SO HOT!

FIRST I WOULD TELL HER WHAT A NAUGHTY NAUGHTY GIRL SHE IS.

THEN I WOULD MAKE HER BEND OVER MY DESK AND PULL DOWN HER UNITARD AND EXPOSE THAT THONG TH THONG THONG THONG.

THEN I WOULD GET OUT MY PADDLE AND SPANK HER BUNS UNTIL THEY ARE A HOT PINK COLOR AND HAVE HER BEG ME TO STOP OR CONTINUE... DEPENDING ON HOW SHE LIKES IT!

I CAN JUST SEE ALL OF THAT WILD HAIR BOUNCING AROUND AS SHE JERKS WITH EACH WHACK OF THE PADDLE... YUMMY!!!

THEN, SINCE THE COMMENTS ABOUT THIS POST ARE CENTERED ABOUT RACE, I WOULD BRING IN MY TWO BUDDIES, TYRONE AND LEROY TO DO SOME INTER-RACIAL TAG TEAM WITH HER AND I WOULD FILM IT AND PUT IT ON PAYPERVIEW AND MAKE A BUNCH OF MONEY SINCE ALL OF YOU WHO ARE MAKING ALL OF THE RACIST COMMENTS ARE SAME ONES THAT STAY UP LATE AND ORDER IT.

The fuuny thing about this, im willing to go out on the limb and say that some of the normal posters are posting this gabbage to get the anons banned. I never seen this much of it on here and after the outcry from the regulars, i would say they are the ones behind all this stuff. its a smart move though for real, im sure you will get your wish

This room should be called: