They think they have Renny... 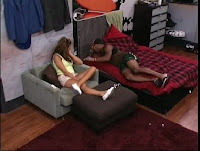 Ollie was talking to Renny in the bathroom, trying to get her to commit to keeping Manchelle. He asks her if she'd vote Jerry out. Renny gives him one word answers, and seems non-commital. Now he's in the punk room with Michelle telling her that they've got Renny, and he thinks they can get Keesha. Michelle thinks that Dan put her up to see her reaction, and watch her dig herself out of the game. She thinks Renny is on her side, because she comforted her after the ceremony and told her to stay calm (...ok?) She's got her eviction speech planned, talking about asking the voters to "right the wrong" that was done to her. Sound familiar? She definitely hasn't given up, that's for sure.

Meanwhile, Renny is reiterating the brief conversation with Keesha, where she tells Keesha that she said yes because she would like to vote Jerry out, just not this week.

Seems Ollie absorbed some of April delusions......Michelle shouda listened to Jessie and stuck with Memphis....

Love that K/R/D/M are onto them and just letting Ollie and Michelle babble and think they are making headway.

We'll see how those camera angle adjustments worked out.

It still boggles my mind that after 10 seasons, people still try and make it seem like being on the block is the most horrendous thing that can ever happen, and they have no idea why they would ever be put through such an abomination.
I can't recall, but has the woe is me angle ever really worked out for anyone? I guess Sheila lasted a few rounds on the block, but other than that nothing really comes to mind.

I agree, bish, and the 24th straight hour of "I didn't do anything to deserve this" has me hitting mute whenever that creature is on the feeds.

Michelle and Ollie are SERIOUSLY delusional. Why is it that Michelle needs to make herself some victim? Bottom line is they're both sore losers. Its a GAME and they each got PLAYED!! I will be so thankful come Thursday when I do not have to listen to Michelle and her stupid theories anymore.