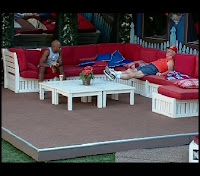 It's pretty obvious that these three have caught April's delusion-itis. They're outside bragging about how great they are, and how the others are soo worried, they won't leave Dan's side. The thing is, they're really not hanging out with him any more than they were before HoH- it's called friendship. I know Manchelle probably couldn't spell it out, but come on. An ad banner flew by, and they laughed about possibly telling Dan that it had another message, this time, with Keesha as the liar. Original. 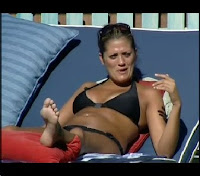 They still have no idea that Dan intends to put Michelle up, and are laughing at how clueless they think Keesha and Renny are. Oh, the irony. The PoV ceremony and aftermath are going to be epic.

ps. America voting for Jerry to get the phone call must mean that they love him, approve of his actions, and would be very upset if Dan votes to evict him. Yep, that's it.

when does the veto meeting go down?? or has it already??

I hope it goes as planned and doesn't change...when is the veto ceremony? I thought that it was usually completed by now?

Not Manchelle, she's clearly a MiChola. Look at her fierce latina styling. Clearly she is a destructive savage chola. RAWR!

It'll be tomorrow, usually early in the day (BBTime). Greatness shall ensue, I hope.

They may wait til tuesday so Dan wont get his azz kicked by michelle so early..lol

Dude, he bosses big ol' football players around all day, he can take the bitch.

EVEN IF KEESHA GOES UP IF OLLIE AND MICHELLE ARE THE ONLY ONES VOTING TO EVICT HER SHE CAN BE SAVED!
MEMPHIS AND RENNY CAN VOTE TO KEEP HER, AND DAN CAN VOTE JERRY OUT WHEN IT TIES. ITS STUPID OF DAN NOT TO KEEP THE DEAL. HE MAY LOSE HIS JOB.
JUST KEEP THE DEAL DAN!!!

hes was a coach interm at a major univesirty, all they do is hold the clip boards and gather up the towels.. i can tell you dont know shit about sports

caps anon, i hate to say it but you are the only one that makes any fuking sense but ive seen them gang up on you too when you speak against their biaz logic

He's a high school coach at the moment, isn't he?

HS... there teenagers, michelle aint no teenager and will kick is skinny azz and he knows it... i c im talking to a knucklehead.

Even his alliance was joking about it today, everybody knows shes going to punk him but you of course

Of course she'll go off, but this is the BB house, not the UFC. LOL@ the knucklehead comment. Irony at its best. :)

AM I THE ONLY ONE THAT THINKS THAT MICHELLE IS TOTALLY HOT? LOOK AT THAT SEXY BOD! I WANT MORE BIKINI SHOTS AND UNITARD.

I HOPE SHE DOES PLAYBOY OR PENTHOUSE OR HUSTLER WHEN SHE IS DONE WITH THE SHOW.