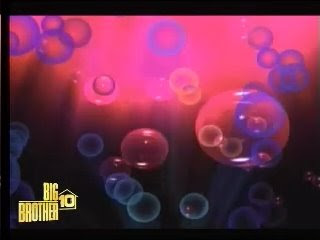 Although the feeds are still on bubbles (come on production guys, press the button!), BBAD is on the air. Jerry Week is about to begin, with Jerry proudly wearing the key around his neck. He says he's prepared to speak to everyone, and hear all ideas. Uh huh. Memphis says he hopes Jerry stays upstairs the whole week, and stays out of his way. Renny is certain she'll be out the door. In fact, no one feels safe at all (as they shouldn't) and they (and we) have no idea what he'll be doing this week. Scott, this second HoH is certainly just as climactic as the first. I shouldn't have made that comment about Jerry, damn.

I added the bubbles some of us are still seeing.

And good deal - if Jerry hadn't won the rest of the week would have been BORING.

We needed something to turn the four against each other.

Rightly so. They shafted us last week too, blocking the end of the endurance comp.

Jerry is getting on my nerves already, talking about how fair he'll try to be. Ugh. SHUT UP.

Not only that, Mike. But it guarantees that he probably won't be in the F3.

any ideas who will be going up?

They all are paranoid that they're going up. Jerry, meanwhile, is babbling that somebody HAS to come back. No, that's not happening.

They're pretty oblivious to the fact that Sept 16th is the finale. They think there are 30some more days left.

I didn't want Jerry to get it, but at least it will make for an intersting week;

I hope Memphis makes it thru...

JUST GOT OFF WORK AND I AM SHOCKED AT JERRY WON HOH.... GUESS THAT MEANS MEMPHIS OR DAN... MEMPHIS HAS BEEN TALKING ABOUT YOU LIKE A DOG ALL SEASON, SEND HIM PACKING JERRY... LMFAO

PS.... JUST LEAVE RENNY ALONE OK, SHE THE BEST PERSON OF THIS GROUP

INDYMIKE AS A BB FAN, I AGREE WITH YOU 100%. WE ARE BETTER SERVED THAT JERRY GOT IT,, IT GIVES US SOMETHING TO LOOK FORWARD TOO INSTEAD OF 4 PEOPLE SITTING AROUND LIKE THEY DONT HAVE A WORRY IN THE WORLD. I ACTUALLY WANTED THIS TO HAPPEN WITH THE ONE KEESHA WON.

Aww, Keesha got her letter from JJ, along with a basket.

I don't ever remember them doing that before, I am glad she got her basket and letter.

Yes for the keesha and Renny.. You could have done it Keesha but this works out perfectly. Let Jerry get rid of either Dan or Memphis and win a comp or 2 and its on

Cant believe memphis whispering to Keesha that it was a fluke that Jerry won.. if i recall, jerry has won about 4 comps and your sorrys azz has won one. The 75 yr old man has been more of a competitor than your chubby azz has been(lol)

Even Memphis called himself the fat boy. i guess its official now, hes a doughboy(lol)

Oh one more thing, Evil Dick did recieved his basket after winning the double eviction HOH and getting rid of eric in bb8

What difference do it make whether you be in the final 3 or 4, only the final 2 get paid. If he hadnt won hoh or the next pov, he would have been gone. Sounds like you just hating on Jerry to me.

Ale, youre a Jerry hater. all he said is that he was going to give them a fair chance, kinda like that bullshit Dan said and did. But its ok for dan because this is big brother right...sheesh

look people, we need to get jerry out!!!! can you imagine the rest of this season with that old dirty bastard sitting around picking his nose..literally? i DON'T want to see this!!!!
i knew the others would have to duke it out eventually but the thought of having to suck up to and listen to jerry for the rest of this season is killing me!
he's a vile nasty man who deserves nothing!
his hateful words make me want to do damage to him. two nights ago he was picking apart keesha and dans every fiber and flaw and now he says he isn't one to have sour grapes!!! WTF??
i suppose he will put up both boys... i have hope memphis will win pov. he does have a dislike for both woman...you wouldn't know it by all the "compliments" he dished out last night. (gag)...so he may put them both up because they are "well liked" by most.
who knows! ugh! it's gonna be a "war storied, my wife and grand kids boring sort of week!!" YAWN

Ugh, I screwed up my router last night trying to hook up Slingbox. Help!!!

The only time a woman has won BB is versus another woman. Jerry, as a fan, should know that. He can't win against Renny (truthfully, I think she could be the first woman to beat a man in the end), so his best bet would be to align with Keesha if he really wants to win this thing.

I don't like it either, but if you want to talk strategy, that would be the move to make.

Every wo/man for himself now!!

As far as I'm concerned, I'm entitled to like and dislike whomever I want.