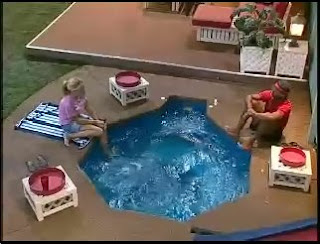 All day long, Renny and Keesha have been indicating that they're possibly starting to believe Michelle and Ollie's stories. The fact that Jerry hasn't approached them is leading them to believe he has a pact with Dan, even though NOBODY has seen the two of them talk. Ollie was even sociable to Keesha for a few minutes, although they mainly talked about religion and relationships. Dan and Memphis have noticed this situation, and plan on talking to the two later tonight.

I think they're paranoid, as anyone would be, but I'm not sure they believe it. They're doing more listening and nodding than actually indicating that Michelle could be saved. It'll be interesting to see if any conversations go down tonight.

Girls get rid of Michelle now

One thing for sure Renny and Keesha, Dan and Memphis are not planning on carrying you 2 to the finals thats for sure... If you are playing for yourselfs, jump from them now so you can go farther in the game, thats all i have to say. You 2 can flip this game all the way around right after Michelle's eviction

Dan cant play, win hoh and put Dan and Memphis up and its clean sailing the rest of the way... Im sure Dan will surely understand that it is only a game

paranoia is right. it is running rampant in the house.
my feeling on keesha and renny is they are simply trying to deflect the blame for voting out michelle tonight off of them. they are also working on jury votes...smoothing over the bad feelings from this week. chatting with and listening to ollie and michelle does not mean they aren't still smart enough to figure out michelle is still stronger than jerry.
i wonder who ollie is going to vote for? if he votes to keep michelle will that tick off jerry? ollie has been telling both michelle as well as jerry he wants them each to stay. will jerry be ticked at ollie if ollies vote goes to michelle? i see ollie voting to keep michelle because he thinks keesha and renny will keep her.
i hope jerry gets ticked at ollie for not voting for him. if ollie votes to keep jerry will michelle feel betrayed?

Everyone is Parinoid, but it seems like the women are parinoid on steriods. With Michelle leading the group. I know some of that is game play, but a lot she believes.

Renny seems to be an easy one to convert. If Keesha switches it will be more game play than parinoia.