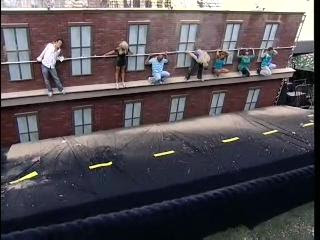 Last year at this time we had our first endurance HoH competition of the season with the giant brick wall. The result of that week was Casey went home. Both events could happen again this week and being it has been a week of Deja vue with Jesse and HoH and the Brains on slop, I'd say it might all just happen again.

Today the HGs were given special tennis shoes for Thursday's competition. The house guests feel like this is so that they all have the same 'equiptment' and no one has a competitive advantage in whatever the Head of Household competition involves.

Being as they got shoes it would suggest standing or walking/running more than hanging, the latter of which would have been an advantage for lighter, smaller females (Natali and Chima?). Hard to say who would have an advantage in a running/walking competition. Casey actually seemed to spend the most time on the eliptical, followed by Russel.

It should be interesting to watch and remember that since Big Brother After Dark started - most endurance competitions have not lasted until the show kicks in at midnight eastern - so the only way to see the finish will be via the Live Feeds.

Click to get a three day free trial of the BB11 Live Feeds!

If it is a endurance competition I will watch it. Depending on the outcome, it will determine whether I watch much of the live feeds after. If rat boy is safe again, we will have to listen to his non stop game talk. I heard Casey say it perfect a little while ago . He said " I would like to punch that rat in the neck".

This year's BB is teaching me stuff about myself. I have learned that I MUCH prefer looking at a pretty girl with nice, big, squeezy bags along with long, slender legs than I do the people that are in there now.

My opinion....voting out the best looking babe in the house early, sucks canal water in a major way. I really think CBS should have hooked us up with a couple more lookers than these fugly ones we got. I only include Jordan because she is so goddamn stupid and you can already see that one kid in she will put on a quick 75 pounds.

they will not do a majority rules question. Because team jesse has already set up a way to rig it.

They said a big announcement that would shake up the house Thursday. Bye bye cliques.

Oh banana head is so so sad. Looks like a younger version of Jerry.LOL Wondering why people dont follow him.

Why: because you are a fuking "whining crybaby"