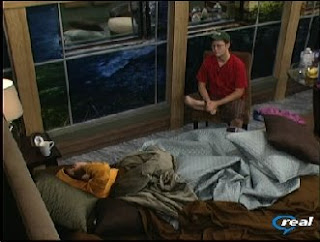 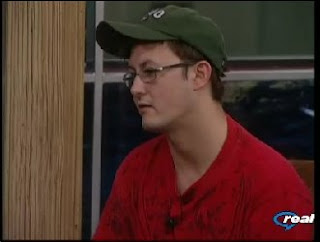 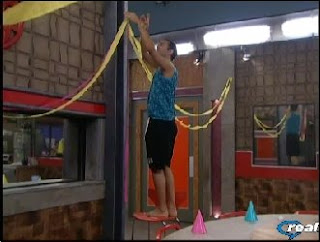 Ronnie was stuck with the task of "babysitting" Chima as the rest of house put together a surprise birthday party for her. Of course, he immediately does what he was exactly told NOT to do - turn on the spycam.

Besides reinforcing his claim of loyalty to her, he's also going off on how Casey is am embarrassment as a teacher. Teachers have a responsibility to have a special image, so he doesn't even go to bars and clubs in his hometown. (Well, wouldn't that be more due to his computer games?)If he lived in Casey's community, he'd run to the Board of Education to report him. I really should take a drink every time he uses his favorite variation of "actions speak louder than words" cliche.

So Ronnie's plan is to first eliminate Jeff so Jordan will be alone, and then Lydia to do the same to Kevin. He is, after all, the only non-athlete to be HOH (he said this yesterday or the day before).

UGH! Get him out of the house. He is a piece of shit.

i hate when people pull the "morally superior" angle. I dont know, i think people would have a bigger problem with a teacher that brags about how well he lies, willing to cheat to win at game, manipulating people for his own ambitions.

All he knows how to do is talk game. He is a socially inept retard. He can't talk about is life or life experiences because he has none.

his distraction for chima is 2 hours of game talk... ugh

I ran to get coffee, and it was like I didn't miss anything. He's still babbling the same schpiel over and over.