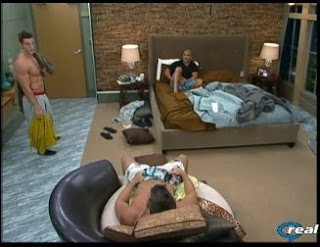 Since Russell won HOH last night, Jessie has resorted back to the sleepy, mopey jerk we dealt with all last year. He's also on slop, which Lydia offered to take for him (blech), which just isn't fair!

Jeff and Russell were just up in the HOH talking a little bit of strategy, and Jessie came in to get some blankets. Not real happy with the consensus that Ronnie needs to go, as he walked out the door he babbled "but next week I get to play HOH. I'll be ready".

For all his faults in the first three weeks, Russell really does understand the game or lack of game of everybody in the house.

He must have changed his mind because the last I heard him tell Russell that it was cool to put up Ronnie as long as their core team stayed in tact and made it to the jury house.

Since i know you have some hearing issues, I will have to go back to the flashback and check this scene over again when I get off work because ive seen you post from your bias point of view before and be totally wrong about what you thought you heard.LOL

As soon as Russell left the HOH room, Jesse and Natalie immediately discussed how they can get rid of Russell, how they would back door him.

They been planning on doing that for the longest after they got rid of their strongest enemies. Im not surprized at that move. Russell wants them gone too in the future

Jesse doesn't want Ronnie gone, but it would be highly suspect for him to gun really hard for it during Russ's HoH. This especially after Russ overhearing the conversation in the pool room- it would make Jesse look awkward to continue to fight for Ronnie.