The Silliness of These People 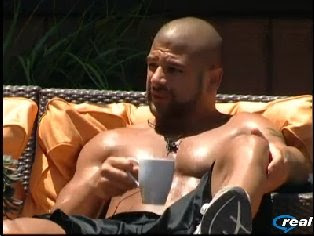 Don't get me wrong - I firmly agree that eliminating Russell is a smart move.

Yet the reason that the majority of these people turned against him is pretty childish. Yes, he's cocky and has had words at times with everybody in the house. As a relatively intelligent person with an athletic build, he is a threat to suddenly make a run for the finals.

But that's not the reason he's (probably) going to be put up, and (probably) evicted on Thursday. He's going home because he had the audacity to sit outside with Casey, Laura, and others on Friday night...and then again last night.

Sure, Ronnie had claimed to Jeff, Jordan, and Laura that backdooring Russell was his plan all along. That's complete b.s. that he said to only save face with that crowd. It wasn't until Friday's incident that started people like Chima and Lydia's whisper campaign.

Yeah I have to agree!! I hate that "you can't talk to the other side BS!!"

Ronnie is such a pussy. He won't make a decision. He is so easily pushed around. He is guaranteeing that he will be a up next week.

HAHAHAHA. The "Puppet Master II " just got schooled by a dizzy blond. He is such a moron.

next weeks choice and vote for eviction should be unanimous

Ronnie the rat is panicking since Jordan schooled him. He scrambled around wanting to talk with someone that will believe him and then sat and pouted in the yard. Now he is trying to muscle Michele on his side. He is a moron.

Dude you need to watch the late night feeds before you post this junk. Ronnie has been getting the other side to think about getting out Russell since last week. Jordan just let him know that casey and crew knew he was playing both sides and it forced him to stick with the majority

HAHAHAHA what Irish, all the dizzy blonde did let Ronnie know that they knew what he was doing. Whats smart about that, now ronnie is scared that they will put him.