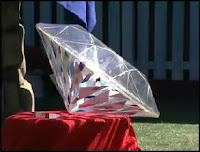 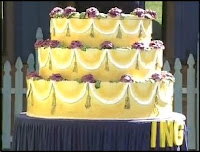 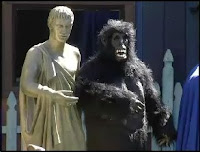 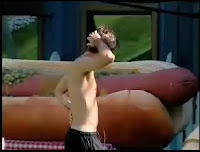 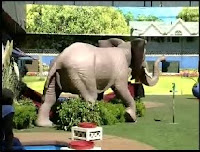 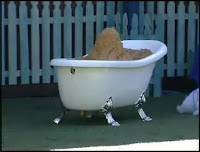 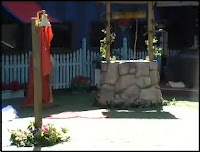 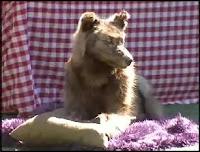 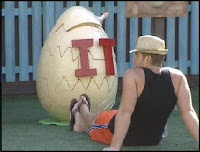 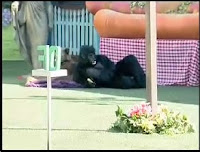 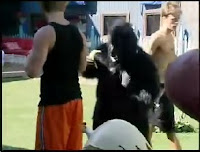 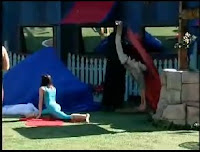 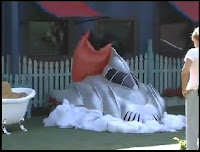 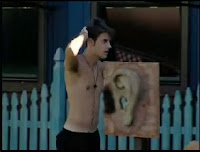 The HGs were woken up this morning (9AM BBT) by a gorilla. No, your eyes are not fooling you- a gorilla. A guy in a suit anyway. Not that much of a surprise, since they did have a sumo wrestler in their living room yesterday evening. Gorilla man had them gather in the living room, and head outside. The feeds have gone to fish- could this be the luxury comp already?

Update: Feeds are switching in an out. It seems that a series of objects have been placed in the backyard, and the HGs have to piece them together into a phrase. They each receive 3 guesses at what it could be, and they have 3 hours to do this. They have to ring in when they have a guess, and are called in to the DR.

The gorilla is giving out bananas and gradually covering up clues as time ticks down.

10:56AM BBT: Jerry has used up all his guesses. Dan and Keesha have used up two apeice, and Memphis hasn't rung in at all yet.

11:35AM BBT: No one has rung in any more guesses. Keesha and Dan have one more, Memphis yet to make his first guess. The gorilla has covered up most of the clues, the ones that remain are the bell used to ring in, the egg with IT written across it, the large plum (or whatever it is), and the large diamond.

Sorry to get off topic, but since it was proposed that I am the multi-identity commenter yesterday, I decided to do some research and this is what I have come up with. I’m sure that some of you super sleuths have figured this out already; nevertheless, I have decided to present my findings.

Here is the list of how I deduced this from the least obvious to the most conclusive evidence.

1. (Least Obvious) All of the usernames link to the same user profile.
2. Loves to constantly chastise the long-time posters – especially Ale.
3. Enjoys instigating confrontation with the other commenters.
4. Loves to berate Keesha for being a dumb blonde.
5. Says “damm” a lot.
6. (Most Conclusive) Frequent and consistent misuse of the ellipsis!

Perhaps people should stop responding to his dumb comments as it gives him the attention that he craves.

BTW, MICHELLE WAS LOOKIN’ SO FINE IN THE JURY HOUSE LAST NIGHT, BUT EVEN I AM GETTING TIRED OF HEARING HER RANT ABOUT BEING BACKDOORED!

wow. i came in to comment on the screen caps but after reading this first post i'm going to have to come back... to weird! who has that kind of time is all i can wonder!!!? seriously.

There are a lot of things in that backyard. Including a real-sized elephant, which I can't seem to glimpse again. The gorilla covers up clues after a period of time.

So anyone got it figured out yet?? Any updates?? This is a nice surprise!! Something different than past seasons!!! YEA

Any ideas anyone? I'm totally clueless, hope this isn't anything to do with the power of Veto and Jerry has guessed correctly....oh, please NO!!!!

I hope this has nothing to do with the Veto. For some reason, they think that the clues that are covered up are no longer usable, so they think that Jerry used up his guesses too early. I have no clue what's going on, but it's nice to get to watch this play out.

I think the clue is 'Bury the hatchett". Hope jerry gets it so he is out of the house for awhile!

Do some of you not read the entire post before you comment? Jerry used up all of his guesses, he can't win. And with this being titled "Luxury clues", why would it have anything to do with the veto?

I wonder if its several phrases, and the items are grouped together for each phrase... like Berry the Hatch it, Let Sleeping dogs lay, Ice(diamond)-ing on the cake, H"ear"d of elephants, not sure about the mudbath and the well tho... anyone else?

Hmm...but the answer is a single, "common" phrase. It seems like all the other clues and possible phrases were there as decoys, to take up their guesses. We'll see!

Gorilla guy covered the diamond just as their time was up. So, the egg with IT on it and the berry. Bury the hatchet is looking really good right now.

Thanks Ale-I don't care what they say on here... Ur ok in my book. I evesdrop all the time... don't usually post; but I am a sucker for a good puzzle!

okay just found out jessie was the gorilla...how perfect is that?!!! he prolly thinks he's a star now!! lmao
still no clue what the answer of the phrase is though.

I like that Memphis didn't think it was Jessie because he "isn't that funny".

was this also pov? or just luxury?

OK it worked, We are all fooled allcaps

I'm sorry, davie, who are you again?

allcapsanon- I agree we need to ignore the idiot's ramblings.

I'm bummed The Renegades are not taking Keesha to F3. It's making me like them less. Now we're starting to see their true colors. It's ALL about the money. If they follow through with this plan, I hope Jerry wins. I can't stand Jerry, but this is BS!
Am I alone in feeling this way?