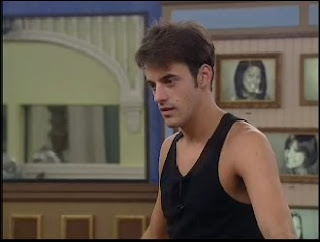 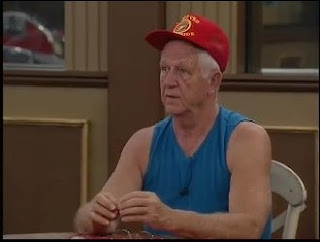 Jerry loves to use cliches, so here's one that's perfect for him - "you reap what you sow". He's spent the better part of this season putting down Keesha, Memphis, and Dan, yet he just got done whining to Dan about how they always isolate him. He complained that Memphis didn't "say all of three words to me today". Well, all of you slept the entire afternoon! "Do me a favor for the rest of the week. When you go up in your freaking room don't leave me alone so much. I'm asking as a courtesy, not a favor, it's just common courtesy. I don't care if you're getting rid of me. I dont give a shit. Just talk to me."

Dan apologizes and promises to include him. He then asks him to hang outside with the rest of them, but instead Jerry goes of into his room.

Oh, Jerry. Stop picking your nose and wiping it all over the furniture, and maybe...just MAYBE people will want to be around you.

Shut the hell up ale, at the rate you going, your fat azz wont make it to 50... You just jealous of Jerry because hes on the show and your azz is sitting home with another big bowl of ice cream all over your face

What a fuking waste

can the hg put dans white tape over jerrys mouth and eyes...and then go up to hoh. cause that's the only way to tolerate him.
i don't feel sorry for jerry one bit. he's vile and gross.