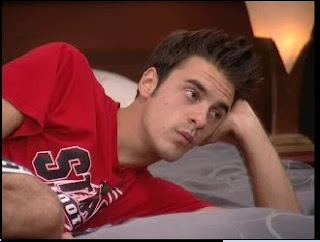 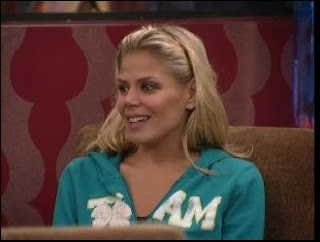 Dan is turning up the charm, and asking what he can do to save her. Good one, Catholic boy. She's decided that Memphis believes she'd pick Dan over him, and has let it slip more than once that she'd pick Memphis over Dan. "You're a bad liar, by the way", she tells Dan, who has some lame excuse that he was hoping he could flip it.

This stuff will NEVER make the air by the way.

No way to show it - can't show it before the eviction - and after it has very little meaning.

Even though they screwed us out of seeing the confrontation - I am still enjoying this much.

Is there any tactical reasoning for keeping Jerry over Keesha? is it because they know the 3 part HoH comp is endurance? and they know Keesha has a better chance of wining an endurance than Jerry?

But only part one is endurance.

Ohh, okay. Thanks for clearing that up for me scott.

I'm enjoying it to. It's about time that something happens. I hope she sees through Dan though.

I just believe keeping Jerry in the house will, come back to haunt them.

I'm pretty sure that's one of the main reasons. Also I don't think either of them would be able to win against her in the final 2. So it seems like they'd rather not take the chance with her in the final hoh, although, as scott said, Keesha has been more miss than hit this year in the comps.

She doesn't, and it's mind blowing. After this blow up though, would it really be smart for Memphis to keep her?

WTF is up with telling her he's sorry? He hasn't done it yet, why is he acting like it's out of his control?

man does Jerry even deserve to be this far? If he makes final 2 i'm going to flip!

If you are worried they will take it down make up a temp account - or send me the video and I will find a place to host it.

Wow - Dan is still working it wit Keesha - like he was trying to 'work it' with Memphis - lol.

Hes not teling her he's sorry because he's not sorry. Memphis is the cold hearted one of this group and like he said, he will not see most of these people again in his life anyway. At least we dont know which way its going to turn out now because keesha and Renny's vote will go to Dan. Its funny she blaming Jerry and memphis is so far up her ass that she can feel him in her chest cavity.LOL

Ok, I edited a seven minute clip starting with when Memphis walked out of the diary room until the end of the kitchen confronation when Showtime went to commercials. It's going to take awhile to upload, though, as it's a big file. Look for it tomorrow morning.

Dan is sitting pretty now. At this point, he might have Michelle, Renny and Keesha's vote in the jury house. Maybe Keesha will sway Libra, too.

I am so tired of hearing keesha crying her eyes out when she did the same thing to Renny last week when renny wanted to know who memphis was going to evict. She was all laughs and told Renny that she didnt know what memphis was going to do. See ya later keesha, i dont feel sorry for ya.

What goes around comes back around

Get rid of Dan now Memphis, you heard how he was throwing you under the bus

Hm. Memphis went to sleep in the other room. Good call.

The way Memphis gets rid of jerry will decide who will get the half a million dollars. Keesha may be able to sway lybra to vote for dan but ollie/april/michelle is a lock to vote for Memphis. Memphis got to make it look like Dan is getting rid of Jerry. Not really sure if Lybra can be swayed either, she did ask for dans vote to stay in the house and he played her off. And remember, Keesha is not liked in that jury house either by 3 of the 5

What is it about this game that Keesha does not understand? Every week someone must be eliminated. Does she think that each week that someone else should leave until there is only her left? What an idiot.

She understands that someone has to go, she just didn't think her alliance would turn on her. She's regretting trusting them now.

I see Jerry wining it all and it shows how little understanding house guest have of this game. At the end there will be Jerry and either Dan or Memphis. Jerry will win because no matter how much the jury dislikes him they dislike MB and Dan more and even more so MB when they finally realize how much of a snake he is. MB will definetely cut out Dan because he already realizes this and this is why he wants to keep Jerry over Keesha cuz he thinks he can only win over Jerry. For either Dan or MB to win they need to take each other to the finals.

i think it's shitty beyond belief that cbs/BB is making memphis keep quiet for the sake of "the big reveal." they are ruining memphis' game right now...and dan is bury him upstairs.
this game is turning out to be really F@CKED UP!!!

That's what this game is about, callie. IF Memphis' game is ruined, it's his own fault. He doesn't have to vote Keesha out today, but he will. Dan's not burying him all- he's buried himself (with Keesha) by making that decision. The vote IS Memphis' after all, Dan can't do anything about it. He's completely lying to her about being on her side, but at the end of the day, he's not the one voting, period.

ale, i do agree that at the end of the day it is memphis' decision to vote out keesha but it was a "renegade" decision. both want her out. i have yet to hear dan say "don't vote out keesha" to memphis. of course dan is gonna get in keesha's ear and say he wants her to stay. that's game play.
my issue is not with who memphis (and dan) wants out my issue is with the production..DR...telling memphis he can't tell keesha she is leaving!
so yes, i do believe production is killing his game because he can't explain WHY he wants her gone. if anything, it may take the sting out.

Callie44- I agree BB production is screwing with the outcome of the game. It makes me wonder what else BB has rigged.

After last night, Memphis must realize he needs to be with Jerry in F2, not Dan. He knows Dan is buddy buddy with Keesha right now and Keesha will sway votes Dan's way.
Why didn't he care that Dan put all the blame on him? That one I still don't get.
I feel for Keesha and understand why she's upset, but it's time to stop crying and start thinking. She's still clueless about Dan and wants to help him with jury votes?!