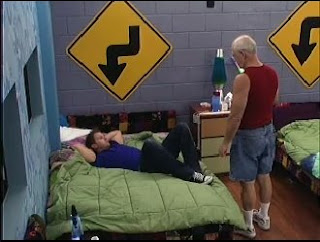 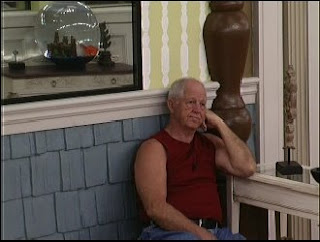 Ever since the veto comp, both Dan and Memphis have assured Keesha that they will let her know if Memphis decides to keep Jerry. A little bit ago, Memphis came out of the diary room and said that he had been told not to tell her before the live show tomorrow night.

Memphis my be starting to second guess his decision, though, as Jerry is driving him crazy. Besides creating new conspiracy theories, he's been wandering the house counting things (ala Natalie), and reporting every discovery to a clearly bored Memphis. Every time he walks away, Memphis either shakes his head or giggles.

I really think this is a dumb move on his part. They're basing this entire decision on the fact that they can beat him in any endurance competition. They're probably correct, but the other two competitions are always based more on luck than skill. Especially the third part, which is always the "guess which phrase the jury member actually said" contest. Plus, I wouldn't be surprised if the endurance contest is set up in a way that gives Jerry a shot to win. 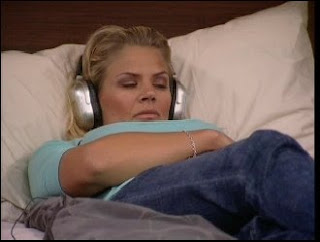 Keesha, on the other hand, has spent no time studying the house and has never been seen going over what has happened in the past two months. She also has been pretty inconsistent in the competitions, even when she has won. Yes, she did beat Jerry in a tie-breaker when she won her second HOH, but her first win was due to Libra missing the final question. Her one veto victory only happened because everybody else went over the hour limit in that "buried alive" contest. This is all without even considering the impact on jury votes.

first...i wish memphis and dan would keep keesha because she is lesser threat all in all. also, memphis told dan he isn't going to be able to tell keesha she is leaving because the DR TOLD him not to.

I agree Scott. Keesha should stay and that ass Jerry needs to go. I bet he will win HOH and ruin the ending of a good season.

If they keep Jerry, I will refuse to watch the finale. He doesn't deserve to be in the house anymore and has only survived because somebody is always more of a threat than him.

Right, Callie, that's what I said.

This is killin' me I tell ya! They can't keep Jerry in there one more day than necessary, and tomorrow night is the necessary night. That crude, disgusting guy has got to go. Please Memphis..rethink this.

I am laughing my ass off at you all getting mad because Jerry is staying.......

And to Marv c, who gives a fuk if you dont watch it anymore.. like cbs is going to cancel the show or we on this board are going to beg you to watch it.. get fukking lost

Scott you just want your gurl Keesha to hang around another week... Dan and memphis will beat any one of these sorry ass competitors.... The final 2 was decided when it was 5 left in the house.... its just a matter of time... i hope Jerry do win and leave a booger on you screen when he leaves(lol)

Sorry you not getting your way again...must be real sad to be spoiled all your life

He can still tell her without really say anything. If ya know what I mean. DR's definitely pushing for some betrayal, haha.

Question: Does anyone think that they are trying to set this season up for Dan to win? (I've wondered this since Julie asked Michelle if Dan might just be the ultimate player).

Anyway, here's my reasoning (such as it is): if Memphis evicts Keesha at this stage (especially without telling her before hand), he might very well lose both Keesha and Renny's votes. Then, if things went well between Michelle and Dan during their getaway... Libra would be the deciding vote.

Also, I have my doubts that the DR said he 'couldn't' tell Keesha. They might have told him it will make better TV if he doesn't tell her. But if he thinks about this, he'll realize that he has more chance of getting Keesha's vote if he's up front with her - or if he were to evict her at the final HOH.

I think Memphis and Dan have both played good games. I think Dans is more subtle and thus better if you ask me.

These two are getting on my nerves. The only one who "wins" by evicting Keesha might be Dan, so he's certainly not going to stop him.

If Keesha had any moxy, she'd be telling Memphis that she and Renny will be voting for anyone BUT him in the final two, if he sends her packing.

They're pretty much confirming that they're keeping Jerry over Keesha at this moment.