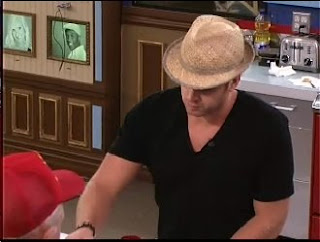 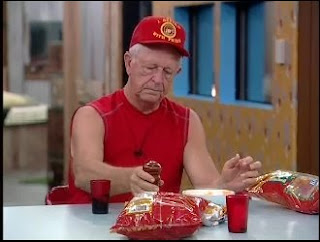 Poor Memphis. He's pretty much stuck with Jerry, who is completely convinced that Dan and Keesha put together a secret deal last night. In fact, they've had a deal since before the infamous HOH competition against Ollie. Oh yeah, and Jerry had a feeling it would come down to the two of them working together since they're so alike. Memphis is taking it all in, and pretending that he wants to carry Jerry to the finals, but when he agreed with him earlier he chuckled after Jerry walked away.

Jerry's still using his supposed influence in the jury house with Memphis. If Memphis screws him over, he promises to "lie, cheat, steal, anything to sway the jury house".

Poor Memphis, and us. Ugh.

poor you??? give me a freaking break with the crap

Ale, its funny how you always think everything on this board is about you or what you think... Your azz is delusional for real

And the POV looks like it will be tonight after BBAD

No kidding, poor us. I have so many feelings of disgust for Jerry
(and that 'oh my god' ass is no treat either) that it is hard to keep up with what is going on in that house. Every day I think Jerry couldn't get any worse, and then does.

I have lived through many seasons of BB, but not since Maggie and her nerd herd have I been so repulsed by a HG, and that is saying something.

geezzz!! the things memphis has to do in this so called alliance for dan...it's getting to be pretty one sided..on memphis' side of the fence.
if dan screws memphis over i will personally hunt him down when he gets out...lmao
i really feel for memphis having to endure jerrys... "take me to the final 2 and your golden with me" bullshit. wasn't jerry just doggin memphis a few hours ago to dan? um...yes he was!
that old bastard needs to go and quickly!!!

I think Memphis is not trying to win the HOH comps. Or rather he was trying not to. Dan has made a lot of enemies by winning a couple and breaking promises. Memphis is a lock to win if he makes the final two - no matter who it is with.

I really haven't found someone this year that I was really pulling for to win. I just know a few that I was sure that I didn't want to win (Jerry, Ollie, Michelle). There hasn't really been a cast that really "wowed" me since BB6 (not including the allstars).