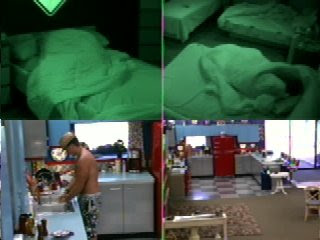 Yup, it is 2:15pm and Dan is still in bed. BB doesn't really force the guys to get up now. There is nothing left to video for the show. Most likely the only part they will show after the jury questions is Memphis and Dan's initial reactions.

There is a show tonight - don't forget - and with the NFL on CBS - those of us out East will most likely need to tune in a bit late (I set my TIVO to record an extra hour).

The spider, Ted, has also been prominently featured on the live feeds overnight - he is a busy little spider and catches his own fair share of bugs.

It's going to be really late for me. I have the Denver/San Diego game and it's already running 20 minutes late with 4 minutes left in the game.

FYI, I'm not going to do a recap tonight since it's just a clip show.

There they go again, the 2 top losers making plans how to continue to be the top losers on here(lol)

No one needs your recap, they are bias anyway

Is it? Is it really?

Why don't you give us your recap?

Scott........it was a great show, they did a super job inserting the clips with what Memphis and Dan had to say. This was a good season, and will be even better if Dan comes away with it all. Nice to see the two of them still enjoying each others company while they wait. Thanks for the wonderful job you and Mike have done with this site.

Oh, I watched it. But outside of the opening when the two celebrated, there wasn't really anything to write about for a recap.

But I'd still like to read our resident fool's recap. Hell, I'd be happy to hear just exactly where we've been "biased".

Scott can i be a yes person too like sandykay... what do i have to do besides kiss your ass(lol)

All you have to do is tell us your thoughts. Who is going to win; who deserved to win. I'm intrigued as to your opinions on something (anything) but me, IndyMike, and Ale.

Oh Scott, stop bein so damn bias... Don't you know that posting topics for us to comment on makes you a major loser? Man, get a life! (lol)

ps. You don't like the same Poptarts I do. U r gay.

I miss plain raspberry poptarts. I hate that you can almost only find frosted pop tarts anymore.

youre a fool I think you might be happier at the "jerry is the best player in the history of BB" fan site. We here are only fans of those who win. sorry you are mad that April and Ollie were "portrayed" as idiots and that Michelle (manchelle for those who come to this site) was screwed out of her chance to win the money that was a lock for her. So yes we are bias.... We like good players that in the end get all the money.
Good luck at www.bigasslosers.com

Hey davea, i think you got me mixed up with your sorry ass moms dude with the april and ollie and michelle shit but its all good... I would feel the same way if my moms was a lunatic and a slut too

Oh Ale, you need to put them pop tarts down along with the ice cream and cake... you know your face and azz is getting bigger and bigger... Once you learn how to say Moo properly, you will officially be a fat cow(lol)

Come on, fool, I'm begging you to contribute some opinions on the show. Who do you like? Who should win?

the show is over dude, whats the damm point. Its in the jury's hands. I just like to reply to the dumb ass quotes with a damm ass quote, that way, you dont feel all alone

and indymike, i bet everything about you is kinda frosty or should i say fruity...lol

I'm just watching the Sunday ep with the clips. It's amazing how good they make Jerry look, even at his worst. Eh.

I know Ale, kinda like how indymike and scott make you look... Its amazing how people can do that but you and I know that youre really a big fat slob(lol)