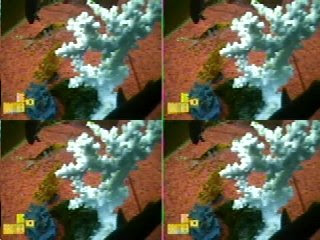 We've had fish for close to three hours, and some sites are reporting that an insider says that Memphis won round two. To build up suspense for tomorrow night, could we see the fish until the live show? (Watch them go back live immediately after I post this.)

What about Showtime, you ask? Well, you may recall the outrage last year when Showtime pre-taped the episode that aired the second night of HOH. It was filmed immediately after BB woke them up, so instead of them celebrating/lamenting the results of the competition we saw them showering and getting ready for the day. I hope that's not the case tonight.

Oooh, feeds came back for a split second to a shot of Jerry and Dan. Back to fish, though.

Back for good. Jerry lost, as per usual.