Chima says she quit - not kicked off. 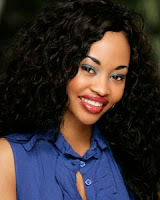 Chima sent an email to the "Big Brother Examiner" and her account of the events from early this morning seem to differ from what the CBS news statement said. Here is a portion of her email:

Hi Thomas. Yes, I did in fact quit the show, although there are reports on EW from CBS to the contrary. Big Brother would like everyone to believe I was kicked off for not following the rules, but I went to the producers repeatedly over the past couple of days wanting to leave....wanting out of that house!

As crazy as that house is, the producers NEVER want the world to think or know that we houseguests DO LEAVE when it becomes futile to stay. I lost faith in the show & my ability to remain committed to this game. All of the remaining housemates know I wanted to leave and that is why any conversation concerning me is cut in the live feed because they don't want America to hear the truth about my voluntary departure.

Do you really believe that I would be expelled for tossing my microphone when past houseguests have only been kicked off for violence & threats of violence? You know better, as do I.

You can read the rest of her letter here: Big Brother 11: Exclusive chat with Chima Simone

We'll never know the real story. I'm surprised we have heard from Chima - wonder how long it will be until the lawyers shut her up?


Click to get a free trial of the BB11 Live Feeds so you can check out the Big Brother House Guests youself! You can also use Flashback to re-watch anything you missed!

That link to the letter is down. Looks like lawyers might have got to it already lol

If I were an attorney that needed work, I'd be contacting Chima - something tells me I'd have a case or two on my hands if she were my client.

No way in hell....she probably signed a gazillion releases and disclosures before the game started. She's got no case. CBS isn't stupid.

Yeah! Okay Chima. You sucked get over yourself. You are now the biggest loser in BB history in my book at least.

If anything, it's CBS that could clean her clock. Breach of contract, malicious destruction of property, just to start. They've done this long enough that some little brat isn't going to be holding them hostage. No doubt this will be a shock to Chima, who will be annoyed that the sun does not rotate around her.

Any attorney that would take her on would be doing it to get in the papers. And would quickly drop her once he sees the video that we likely will never see. After all, it would be prudent CYA for BB to put on tape every camera and mic during Chima's departure. It won't be her word against BB; it'll be BB showing what happened, in living color with multiple angles.

She has no case. She's been handled with kid gloves so far, even if she can't figure that out. If she tries to play hardball, it will be her spitwad against a daisycutter. And she still might have civil problems from other ethnic organisations. Her best course of action would be to shut up and stay out of sight. And of course, she'll do the opposite.

The article is still there (Google Big Brother Examiner), but Mike's link is broken.

Maybe lawyers take weekends off? Or BB doesn't know it's out there yet.

Well she didn't particularly reveal any details, so I don't think CBS would need to shut her up about the statement she made. But as pointed out, she's signed various releases and disclosures. I just don't know who she thinks she's kidding.

While she was officially kicked off, she quit the moment Jesse was evicted, at the first sign of a crack in her game..

Cal person, how do you know if she has a case or not. How do you know what went down or what was in her contract. You sound like a Lawyer that has read her contract but im sure you are just throwing out a bunch of gabbage and dont have any lawyer knowledge at all.

You said as you have pointed out about the gazillion releases and disclosures, so does that mean you are Garv too because thats the only person that I see on this thread that have pointed out anything. I didnt no there were so many message board lawyers around.

Also I just read the article and I didnt see anywhere in that article that she said she was sueing. So where did this come from or is this another online lawyer assumption

Well, Jay, I do have more legal experience than you, it seems. As well as experience with entertainment contracts.

First, understand that the entertainment industry didn't get to where it is by giving the artist (Chima in this case) any more cards than absolutely required. If you think she signed a single page contract that said 'play our game and win $500,000', you'd be in error. Keep in mind that when you buy a CD, the artist gets a couple of pennies for that $12 CD.

I've seen similar contracts and worked with a few reality show participants. The lawyers keep things very firmly in the control of the studio, and include rather oppressive financial penalties for violations.

But setting that aside, consider this: she left the show before it was over. Chima says she walked; CBS says it ejected her for violation of rules. Both still add up to breach of contract; she did not fulfill the terms of her contract. She intentionally dropped valuable property into water, destroying it. Willful destruction of property.

Will she try to go to court? Depends. Did they pull her compensation because she left, or deduct the replacement cost of the equipment from her compensation? I don't know. But if they did and she feels she is "owed" the money, as she might feel she fulfilled her obligation, she has to file in court. And one can expect either during challenge or exchange of evidence the tapes of her actions will be presented. At which time, accompanied by her contract, her grounds will evaporate, and she may at that time also find she owes legal fees (again, a common 'stick' included in such contracts to preclude litigation).

And no, I'm not Garv, but then the nature of entertainment contracts aren't exactly a secret.

Hope that helps clear things up.

Chima doesn't have much she can claim. Everything they do in that house is recorded on video and audio. Even the DR sessions are recorded. That letter is a typical move I expect from people who act just like Chima. They never accept responsibility for anything. She clearly is deflecting everything by claiming America is siding with a woman hater ( Russell) just as she claimed Braden was a racist. Now a days playing the victim is a pretty regular defense. The goal is deflect anything they did or simply justify it as a victim. It's sad because this is happening more and more. She blamed the " Red states" for things in the game saying "blue state" residents don't watch tv, they read books. Clearly a liberal elitist statement. Again, not her fault, its the reds states.

Link fixed! Not sure if I put it in wrong or it changed - but no matter.

Could it be that CBS is letting her say the little she did to geneate publicity? Yesterday was the busiest for my BB sites since the Endurance Comp...

thangs that make you go hmmmmm

To Cal, Like Casey said to Jordan's remark about Ronnie being so smart.

You are such a smart lawyer if the rest of us are just flat out retarded. Thank you very much for the pennies on the dollar off the CD reminder. I will remember that one for ever and use it in all opening statements when I finish law school

Just in case the link DOES go down - here is the rest of her note (on a side note - please play nice! we are all fans of the show!):

It's better that I left. I did what was best for me in this game and that was to leave. When I chose to play & play hard the power I did earn was completely usurped by a game piece never used before in this game and my HOH reign was rendered useless. I have no regrets. As cliche' as it sounds, until the public is a part of a human pressure cooker, then the judgements should cease.

I find it interesting that my personal attacks on Russell have been highlighted, but his attacks on me pushed under a rug. Selective portrayals? I think so. Russell did terrorize the house, especially the women in the house. Why America constantly finds men attacking women okay, yet vilifies the woman defending herself, will always confound me. But what's done is done, now BB fans can find a new woman to hate. I didn't sign up for what I was exposed to & I left gladly. It was the principle of the matter, the $500,000 prize be damned. That's all for now! Take Care...'

I know I posted links to your stories on my facebook and I have over 700 friends... and I know some of them hit it since I got tons of thumbs up and comments on my profile...

I would have linked earlier except-well its been dull! lol

Apologies if I wasn't as clear as I had hoped to be.

You might not want to include the CD reference in all your briefs and presentations. It was included as an example of how the deck is stacked against artists. I thought you would have understood that, so I apologise for not making that clearer.

On a more serious note, I really thought you were commenting because you genuinely did not know more about how those contracts work. Rather than respond with an insulting putdown, I tried to briefly (no pun intended) fill in some of the details for you. I also apologise if it sounded condescending, as that is never my intent in such messages. Unfortunately, in my field, one can never assume the recipient will have the same set of facts the author has. It's partially why legal documents go into numbingly tedious detail, to attempt to minimise grey areas.

I'm sorry you didn't see it that way.

PS: That Ronnie comment was hitting below the belt! What did I do to you to be insulted that way? Sheesh...

Waaahooo! Glad to see her gone. She annoyed the hell out of me!