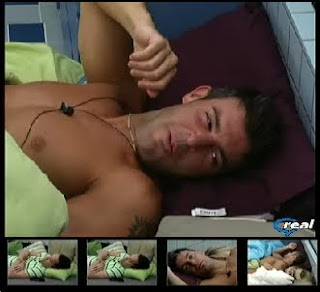 No, it wasn't yesterday when he lost the veto. It also wasn't the day before when he was nominated, or the previous day when Russell was evicted and Kevin won HOH.

The day that sealed Jeff's fate (barring some weirdness over the Pandora's Box key) was ten days ago, as two terrible decisions have come back to haunt him:

1. Keeping Natalie over Lydia may have been THE worst move of the season. Lydia was clearly a hard to person to share a house with, but she was no player. She was the first or second player out of every competition, and unlike Natalie it wasn't because she was purposely losing. Kevin was also a lesser player with her around, as he had to constantly clean up her messes.

2. Not letting Kevin win that night's HOH competition. Jeff was not on Kevin's radar at that time; Kevin would have certainly been targeting Michelle and Russell. Even if Jordan or himself had been put up, one of those two would have likely gone home.

Of course, another terrible decision was set into play that same night, as Natalie and Kevin pulled out a miracle and convinced Jeff and Jordan that they could be trusted. Backdooring Russell was the icing on the cake in a week of bad decisions.

It will be some fun week over in the jury house when Russell sees Mr. Technotronics walk through the door. He has promised to mop the floor with his face. It will be fun to watch.

Natalie is a truly disgusting little creature. She has terrible eating habits....she's lazy as hell and doesn't help out with the chores....and of course, she doesn't like to bathe.

Natalie reminds me of the "Pigpen" character in the cartoon, "Peanuts." She has played a good game though. She has lied about everything and has shown that she has a talent for lying.

Being able to lie is one of the prerequisites in the BB game. That will be Michelle's undoing. She is unable to lie without giving it away.

Is it somehow harder for smart people to lie more than stupid people? I sure as hell don't know. But, we're watching a good example of a PHD, unable to pull off a bold faced lie and a street urchin that is able to lie with each and every word that comes out of her mouth.

Americans seem to dig evil and untrustworthy. Michael Vick got a standing O in Philly when he played the other day. So he murdered a few hundred dogs! He can play football and that is what matters.

I don't think it's harder for smart people to lie. But it's definitely harder for socially awkward people to lie, and/or speak. Regardless of what Michelle is talking about, be it keeping Jeff or what she's making for dinner, everything that comes out of her mouth seems forced, and she comes off being super nervous for no reason.
Her inability to converse is what's going to be her downfall. She seems to have a pretty good strategy, she's been playing whichever side she has to and telling people what they want to hear, but she just hasn't been able to make anything she has said convincing.
And that stupid nervous laugh she has every time she says anything is more than enough to evict her I would think.

Whether's she's talking bullshit or not, she is right in that her best bet to survive the next week is with Jeff as her ally instead of Jordan.

We all know that Jordan's useless in competitions. I'd also want Jeff to help fight Natalie and Kevin.

Notice she's the only one in the house to figure out how Natalie is the puppetmaster...too bad nobody will listen to her.

Last night I was watching part of the After Dark show and something Jordan said made me laugh. "It should be you, Jeff," drunken slur. "You played the game, you are the only one that played the game."


Badly at that. He should've gotten Natalie out before Lydia. Anyone playing the game would have noticed that she was throwing comps or close to winning them. Lydia wasn't. She backed into this game via being "found on the street", her words (to Chima when asking if she got picked up off the street too). Lydia was one of the ones there only to make it to the jury house.


His other bad choice was getting rid of Russel and breaking the alliance to final 4 that would have worked for him. He believed out and out lies about Michelle because she is not used to social situations. She doesn't seem to know how to talk in a group, and most everything she says is hesitant. And her memory sucks! She will be asked something and go "umm ya, well I know we were talking in the red room, but.. umm.." It makes it seem to others she is lying when in fact she just can't remember what was said. He also believed lies of Russel because Russel got drunk one night and said he would stab Jeff in the back if the opportunity rose. What Jeff didn't remember, was the context in which that was said. He was speaking of when they GET To the final 4 he would then stab Jeff in the back at the first opportunity that came alone. Jeff didn't hear the context, he only heard the words.


When Kevin came to Jeff with the lie, it was easy to believe. Not because Kevin is such a great liar, but because the seed had already been planted by Russel himself and Michelle's social problems.


What really has shown how bad Jeff is, is his memory. He doesn't remember how TIGHT Natalie was with Jessie. That she was his little 'pit bull' and would want the person who got Jessie out, out of the house too. Instead of remembering everything from that time, he believes one lie from people that have hated him to this point. Then he's SHOCKED he gets put up? That they are after him?


No, I think that if anyone was "playing" the game, it was Michelle. She's been telling people what they want to hear, not committing to too much, trying to please anyone to stay in the house, and not making any real deals until the end. She's tried to align herself with the best, without putting off the rest. AND she doesn't talk crap about anyone.


It has sickened me lately that I even liked Jordan & Jeff for final 2 as I hear the venom come out of their mouths about Michelle, all based on lies and Michelle's quirks. To be totally honest I really feel sorry for her in the social part. Not everyone is outgoing and able to make friends easily. I think she's honestly tried to "play" the game since the beginning.


What about Natalie & Kevin? Well since Natalie & Kevin both went so far by not winning anything or doing anything... no. Their "game" consisted of riding on everyone else coat tails to the final. Though I have to agree with one of the comments. "Pigpen" is the PERFECT name for Natalie. Every time she eats I have to turn down my sound or I'll puke. But I don't agree about the game part... but then it could be MY memory. I don't recall her saying anything in the DR about coasting by was her plan. She didn't have game till the end.


I get so sick of the people with foul mouths towards others winning something. The only reason I didn't mind Evil Dick winning was because he didn't say crap behind your back. He would say it to your face. The Ratpack in there now, don't call Michelle "bitch" to her face, they say it behind her back. I don't think any of these... RATS should win. Yes, even Jordan who I used to root for, because she should know better then to say those things about someone she doesn't even know.

Russell said in the Ross Matthews interview that he had no ill will towards Jeff and would greet him with a handshake.

Michelle has been trying to play the game but she such a bad liar that as soon as she leaves, people talk about the nonsense that she says. Like what she told Kevin last night, "she want to go to the final 3 with the strongest players". Yea thats gone make Kevin save Jeff, they had a LOL day with that baloney

If you think Kevin or anybody else who is playing believes crap like that then she needs a new wake up call. And yes Michelle does talk about people, she was doing it last night and she did it a lot when she was hanging out with Russell.

So Michelle may be playing the game but shes playing it very poorly. If people are thinking you are lying all the time then you are not doing a great job of playing it. On the other hand, Natalie is lying all over the place and because she showed how loyal should could be to Jesse and her team, people believe her lies even more. Of course, you will get caught in more lies now because theres not much to talk about and few people to talk to.

Michelle's a great competition player but a horrible game player.

I think when you look at Ronnie, you can say he understood the game well but was a horrible game player because he over played his hand too many times. Anybody can make a mistake but when you keep overplaying your hand and you keep getting caught in your lies then you are a bad game player period.