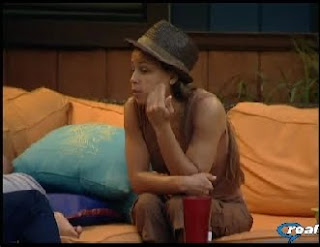 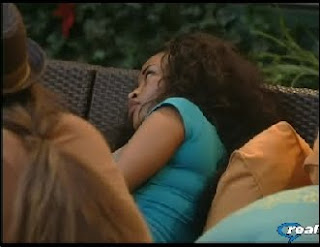 We may not have seen the fireworks we expected, but don't think that Lydia, Chima, and Natalie aren't mourning the loss of King Jessie. Apparently, they stormed into the diary room and threatened to quit the show. A producer named Ruth calmed them down by saying that Jessie was "taking it well". To appease them, they were also given additional beauty products (others were each given an item to make it fair).

Chima also dumped Russell's suitcase out, and somebody stripped Jeff's bed of his sheets. Expect things to get more heated as their anger continues to ferment.

Clarification: Jeff and Russell received nothing. Chima wants to go off on Jeff, but is supposedly going to wait until after the POV. Jeff's sheets weren't torn off his bed, but his hate was filled with Nerds.

hahahaha. Oh man. Did all three of them realize they now have very little chance of advancing without Jesse? That's funny.

this is just ridiculous. could they be acting like bigger children. this just gives michele more reason to side with jeff and jordan over them. they are gonna do nothing but drive wedge between the "girl" alliance with this crap

They should have been allowed to quit. Does CBS really think these three are going to stop now that they know they can tell BB what to do.

Of course if they insist on leaving, they should be informed they do not pass go, they do not go to the jury house.

One can argue that the show would be 3 players short, but of it's a double elimination next week, there's 2, bring back a previous player or two, and there you are, back on schedule.

CBS is really setting themselves up for ransom for the rest of the season.

So from what I just read, it looks like Michelle and Jordan are being pretty buddy, buddy right now. So that looks good for our hero Jeff.

Why dont you write the truth the first time before coming back and changing it. You get the one sided mob going over nothing

Yeah....because having his sheets torn off is WAAAYYY more childish than having his hat filled with candy......

Why am I feeding the troll?

Bish, I've tried to have actual conversations but it's just not worth the effort.

I think I'm still just on a high from how awesome tonight's show was!!

What in the world did they think they were going to accomplish by doing that? Did they actually think the Producers were going to say..."OH, OK we'll bring him back just because you are demanding it"...REALLY??? AND...they can be bought with beauty products? Again...REALLY?!

As far as I remember, there has been only one successful challenge to the producers, and that was Chicken George getting the BB1 HGs to threaten to walk out.

Do these three really think America is going to tune out BB11 if they departed? Ha!

Let those 3 walk and put Jesse back in the house... no loss! and without the women he will be back out the door again. Don't the door hit ya on the way out biatches!

Just to be devils addvocate.

In past season we have all complained about producer manipulation. Really is this not a obvious case this year. They bring in this POWER, have America vote when they know it will go to Jeff who is very popular and it will change the power alignments in the house. CBS gets Jeff/Jordan love blossom story line and the house is not run over by one power alliance of numbers.

Popular players have always benefited from the twists, as far back as the introduction of twists. It's becoming more and more clear that they're putting these twists into the hands of viewers for that very reason, to keep the favorites in the game and their ratings consistent.

"Popular players have always benefited from the twists, as far back as the introduction of twists. It's becoming more and more clear that they're putting these twists into the hands of viewers for that very reason, to keep the favorites in the game and their ratings consistent".


I think its because loosers like you dont post or threaten to stop watching the show unless your team is winning... havent seen you all year until Jeff recieved the gift and now i see you everyday. Oh wait a minute, you did come out for a minute when Russell jumped to Jeffs side and Jeff won the gift from heaven

So in essence you are saying that Ale is no better or worse than Lydia, Chi-monster and Nag?

I agree Ale they do put it in Americas hands to get the ratings, and after all isn't that what the concept of Big Brother is all about? Big Brother is watching and manipulating the silly hamsters... I mean really are any of us shocked?!

Come on AName- lighten up you are cheering just as loudly for Jeff as the rest of us... and you would report just as skewed a view if you ran your own blog... show us your blog and where you are so much better... How much time a day do you devote to your unbiased view of the BBhouse? oh thats right... you are only biased against those that are willing to put in the time and effort cuz that is easier for you... :O)

Show us all your blog and we will see how it should be done.

I guess I just dont love my favorite player as much as you all do. Most of these blogs are not written to tell us whats going on but instead to give us a bias report and circle the wagons.

Maybe thats why there are not many posters on this site. Only a hand full of friends who do nothing more than co-sign with each other. Many loyal posters over here dont even come around unless their favorites are winning. I figure they do like they say when things are not going their way and dont even come here or watch the feeds... although thats your choice to do what you like, its a pouting attitude at best

And why wouldnt you even want someone that thinks different than you and has another viewpoint. I guess everybody needs a pat on the back and an assurance that their though process is on cue. LOL

if you don't like the place, leave. Go someplace you enjoy. If you feel you have an "obligation" to enlighten others here, you can forgo the noblise oblige.

For myself, I don't know any of these people. I wandered in. I don't have the feeds, and don't feel I need them. I can get most of the info I want from here and a couple other places.

Oh, and if you insist on overusing a certain word, at least spell it properly. It's spelt "loser". What you type can be defined as relaxed, which I suspect is not your intent.

Root for whomever you wish to win, just lose the ad hominem part, okay?

I agree with Cal except for one thing. It is actually noblesse oblige, not noblise oblige.

Thanks Cal, You are another one of the message board experts that claim you are a perfect person. Exactly what ive been saying over and over again, If i hurt your feeling, so be it, the names that I want to call you will never come out

Its better to be a goody 2shoes than to not have shoes at a all. Only a non spoiled person would even understand that so i know youre lost

alias Allcaps, hi dude. havent seen this name in a while

Such a silly child. Just keep chasing those fantasies of yours. You might actually move beyond pitiable someday. Really too bad as you did have raise some good points, but just couldn't seem to rise above petulance.

"Really too bad as you did have raise some good points, but just couldn't seem to rise above petulance."

Be real careful how you try to judge ones grammar.LOL