Russell Continues to Work On Kevin 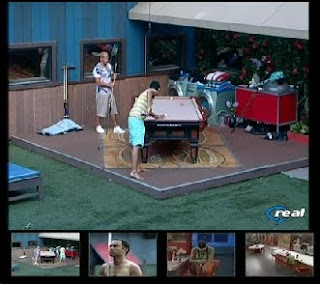 Russell has made one great point - if either Jordan or Michelle gets HOH he will be the odd one out. Kevin appears to be playing along, agreeing that if Russell stayed in the house he would be the target. Russell's idea is for Kevin to approach Michelle about banding together to save him. "This is the biggest move of the game", he tells Kevin.

Kevin is usually not a good liar, but I can't believe for a second that he's falling for this.

Edit: When Russell went inside after their conversation, Kevin started singing "Do you think I'm stupid". So much for any hope of Russell making it past Thursday.

Kevin is just going along til thur because he dont want Russell to kick his ass(watch when he get back with Natalie). Kevin is more scared of Russell than Michelle is. The both of them will say anything to Russell so he want jump all over them. Natatie on the other hand will cuss back and forth right back at him. Russell is a big bully and the only 3 people in the house who was scared of him was Lydia and Michelle and Ronnie

Some people are just scary people and you can see it in their eyes.

Jeff aint one of them

The only way Russell could survive would be if he could somehow get Jeff to start looking at Jury votes. Jessie and Lydia would go for Nat or Kevin, with Nat or Kevin voting for the other if one of them makes it to F2. If it's down to Jeff or Jordan against Natalie, Russell would seem to hold a grudge against the backdoor and rejoin Team Jesse. That's 4.

And that would seem to be the last chip Russell has: threaten to vote against J/J or consider if Jeff has a better chance of winning going head-to-head with Russell.

Jeff, of course, will not be interested, because he wants J/J as F2 (which will likely leave him in 2nd place) and isn't thinking Jury votes. And I suspect the more DR tries to get him to see the light, the tighter he will shut his eyes.

Nice guy, would like to see him win, but even AG admits he's not the sharpest tool in the shed. unless Jordan wins HOH, he's toast. And even then, she may get manipulated by the POV in the same way Boogie was, when he was forced to vote out Dr. Will. If it can be done, Nat will make it happen.

LMFAO. BB after dark is on now and all of the houseguest are sleep, Camaras on sleep people and there pictures on the wall (hilarious)

He has some hope though, Jeff and Jordan was discussing how production was trying to get the both of them to keep Russell. Jeff even said, who do they like me or Russell. Jeff amd Jordan has talked about the Dr's manipulation probably more than any people I have ever seen but just maybe, production has had to work just a tad harder convincing people who dont understand the game as much as others

Im not the only one who has been noticing it either, theres a thread on bigbrotherupdates thats getting plenty of response to the DR's manipulation

Looks like we got us a cage of sleeping hamsters! This must be driving production nuts!! It's hilarious! Notice the ants crawling on Russel? This is as much fun as watching my cats sleep.

Russell should be working it for real. hes knows Jeff made the right move. For a fact, Russell even said hisself before the nominations that if he was Jeff that he would put up Michelle and himself.

If Jeff was going to roll with Kevin and natalie, he made his biggest mistake by not letting Kevin win the HOH that he won. Kevin was way out in front of everybody and they knew the count because production was telling them. Kevin would have went straight for Michelle and Russell and that would have left Jeff sitting good for next week.

Dumb move by a not so smart player but ive said that all along. Without the coup, him and jordan wouldnt even been in the game

Jeff is showing a side of him that he hasn't shown before. He can be a really nasty, angry guy. He has said a few things about Michelle to Jordan that are mistakes...IMO.
Women don't respect guys that talk about women a certain way. I've been on a couple of boards today where I saw that some ladies were starting to look at Jeff in a different light.


Also...Michelle seems like a fairly decent young young lady, to me. She's been treated like shit by just about everybody in the house and is still in there trying to smile and be a person you can live around.

Michelle's game has picked up. She doesn't have many fans. Mebbe I'll give her my support.

I agree with you on Michelle. She's pretty likable, albeit a bit awkward, but she's been fucked over from day one. Ronnie didn't like the fact she's smarter than him, so he made sure none of his friends like her. Her other relationships have been pretty tenuous, but her biggest mistake is working both sides in the widening drama between Russell and Jeff. She could have nipped that immediately.

The only problem with Michelle is that when she is confronted with accusations about past conversations (whether true or not) her ambiguity leads others to not trust her. She seems to "misremember" a lot. Unfortunately, I think that it is because she overanalyzes and gets bogged down with semantics.