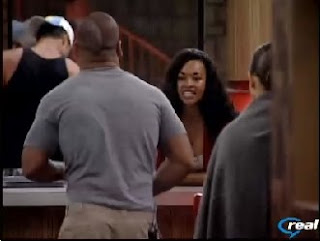 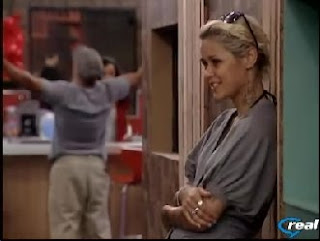 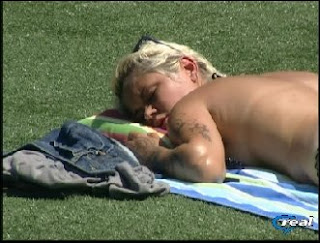 One of the frustrating aspects of this season is this cast's body clock. They sleep almost all day, and then the fireworks occur past my bedtime.

I figured today would be no exception. Sunday's usually a quiet day in the house, with lots of sunbathing and napping. Not this time.

Russell was in pretty good spirits earlier in the day, but was also throwing out a wisecrack or two about Chima every now and then (mainly about her cackle). Chima was camped out in the HOH for most of the day, constantly making a few cracks about Russell.

You can guess what happened next - the two of them screaming at each other. She kept calling him a terrorist; he screamed at her over and over she's a racist. Chima eventually backed down, claiming that she calls him a terrorist because he terrorizes everybody in the house. Um, yeah. (Note Lydia's smile as she watches the chaos she created.)

The feeds eventually went down, and we're back with the Michelle and Lydia sunning themselves as the "haves" watch the Jeremy Piven movie.