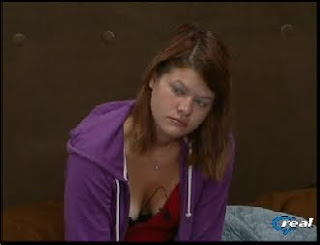 Nobody can say that Michelle hasn't worked hard to get where she's at in the game. She was initially paired up with two people who didn't like her, and has always been the outsider in any group she was affiliated. Yet winning 3 POV's and 1 HOH has launched her into the final four (unless something strange happens in the next four days).

Her competitive skills are now in place to get her into the finals. Obviously, she's in by simply winning HOH or POV next week. But even without that happening, she's in a pretty good position. If by a small miracle Jordan wins POV, she could survive even if she's on the block...but there's a chance that Kevin or Natalie could do the same if they think about jury votes (don't think Natalie's not thinking about that scenario).

Yet there probably hasn't been a more awkward final four contestant than Michelle. She's prone to giggling when pressed with questions; she forgets details of conversations (and not conveniently like Natalie). She could have easily squashed Jordan and Jeff's paranoia about Russell if she could have formed a coherent sentence. None of this will matter, though, if she survives next week.

Please let her go home, im tired of seeing her crying like this is the last days of her life. Shes only crying because she thinks she may be getting put out and she cant win the money. You get no sympathy votes here faker.

Well she's not as bad as Amber and she's a hell of a lot better looking!

Well I got to agree with that one... Amber's crying drove me mad too. LOL