Have Nots - well - not really - and Terrorist talk continues. 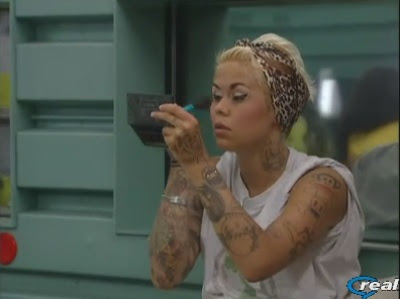 The feeds are back and the competition today was a group thing. The HGs made out pretty well - I think I heard they only have slop for one day. The competition involved pairing things up - 'two fish' were mentioned - and they were dealing with the goopy bread dough stuff similar to the pimple thing.

Besides the food, they also got some luxuries - the one they are excited about is a grill.

On the terrorism talk, I wrote that because just after 12pm Chima was complaining about Russel, he left a rosary somewhere and Chima felt that meant hae wasn't really Catholic. She said, and I quote, "He’s not even Catholic, hes some f**ing like extremist Muslim terrorist." I'm guessing THAT won't make Sunday's show.

The three "Jesseheads" as I like to call them also continue to complain about their situation - to the point where apparently they were told if they walked they would just be replaced. Chima says she doesn't believe they would replace them.

Really seems to me like the producers are letting them control the show - I wish they would just let Chima, or whomever, walk - and then tell the HGs - there is still an eviction on Thursday and let Michele put up two others.

Chima continues to think Michele should put up Russel and Natalie is all about saying Michele promised her safety this week if Jesse didn't nominate her last week, so the two of them might blow up yet again after the nominations.

Oh and Lydia re-dyed her hair.

Click to get a free trial of the BB11 Live Feeds so you can check out the Big Brother House Guests youself! You can also use Flashback to re-watch anything you missed!

I wish the producers would call them on their bullshit. Like every time Chima pulls the terrorist card on Russell, they would replay her stupid "A vote for Braden is a vote for a racist blah blah blah" schpeel on that TV in the living room. Although I doubt it would really deter her, perhaps it would help put things into perspective for some of the other HG's?
Who am I kidding.

Thats why I wanted to get the quote out there - CBS helped her out by showing her say she was only saying he 'terrorized' people. However this comment was a direct attack - affiliating Muslims with Terrorism.

Understand one thing - I don't care that she said it - only that she can't talk like that and THEN throw out racism cards on others. Be Consistent.

YOU WOULD GET MY VOTE

I bet you the thousands of Middle east people would love to get the support from some of you when they are detained for racial reason by the American government. Some of you guys just got to get into politics, it would improve our status on foriegn soil and racial relations.


You would def get my vote... geez

Exactly. My memory is a little fuzzy, and all the seasons blend in to one more and more each year, but Chima has to be one of the most hypocritical in the house in recent memory.
Ahhh well. I would really, really, really love it if cameras followed them home post-show so we could see their reactions to how things played out on the show and how the fans actually feel about them. That would probably be better than the show itself.

She is just a hypocrite. She is was just saying "he better not threaten me or I will have them throw him out"

Yet she is saying she would like to blow him up and other choice words.

I think the whole words thing is bullshit but she cant cry racism and then do the same thing. Call him a terrorist but don't call others racist. She is still a sore loser cunt.

Natalie REALLY must have been stinky the week she was on the rag and refusing to bathe.

A friend of mine from L.A. called me today to ask me if I could smell Natalie's snatch, all the way over here in Ohio?

He said that whole end of the valley smelled like dead possum.

When Chimapet gets out of the house people are going to cuss her out and throw shit at her.

It really is the producers' fault for empowering Chima, changing their schedule for her sake, and talking her down and trying to appease her despite all of her vulgarity. She's pushing it because she knows she can get away with it, and Lydia and Natalie have jumped on that wagon.

Eventually, it'll become too much and they'll be told to STFU or walk.

I say let them walk! They can always throw in the three old players that got bumped in the first show although I would hate to have to hear that one girl's voice again.

Looks like it's Chima and Natalie. Of course Chima is acting like it's the end of the world and Natalie is combing through the rule book for god knows what reason.
Natalie is also trying to convince Lydia and Chima that they somehow have the numbers next week? I'm having a hard time understanding it.
Chima is already admitting defeat. Good for her.

@ bish
Natalie thinks that Michelle indicating that she would not like the nominations earlier was a rule violation and would give Michelle a penalty nom or something... but I am pretty sure that Chima announced right away to Russell last week that he was going up... Chima is right they do have shot memories.

Just like Natalie seems to forget all the lies she made up about Michelle in the green room with Jesse and Ronnie, cuz she has never done a thing to Michelle... BS!

Ahhhh okay. Thanks.
I always find it hilarious, when the self righteous people have their backs against the wall anything that anyone does is against the rules somehow.