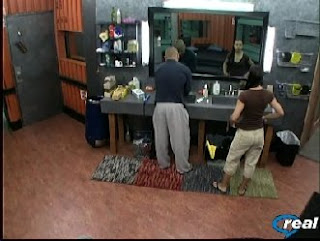 Besides Lydia, Chima, and Russell, the players are Jeff (chosen by Russell, much to Jessie's chagrin), Kevin, and Natalie. Michelle is also bummed that she's not playing, as she feels she'll go up if either of the nominees are taken down. It appears that it's one of those contests where each player goes out on his own to play, and then the winning time is determined after everybody plays.

After the players were chosen, Natalie had a little whisper with Russell telling him that he shouldn't worry as he's not going home. I wonder what "Scamper" has planned.

Is it just me or has Jordon talked about nothing but food since Jeff was put on slop... lol