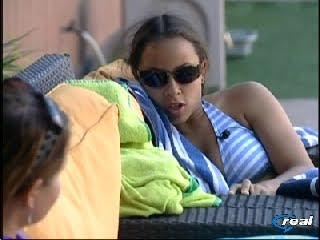 Scott posted last that Russell was trying to get Kevin to consider voting out Natalie and keeping him in the house. Kevin made it pretty obvious that he was not considering it right after Russel walked away.

Later on last night Kevin told Natalie about the discussion as well clearing up any doubt that he was considering working with Russel.

Today the house has been VERY quiet. There just isn't a lot to do until Thursdays eviction and Russel seems a lock to go home.

The two most interesting things I have heard today?

When they were alone, Kevin told Natalie he doesn't believe she is only 18 - he said she plays the 'young and innocent / ignorant' card to her advantage to seem like she isn't a threat. Kevin obviously suspects her lie now and who knows - he might use that against her to show her dishonesty later on down the road.

Just as I was typing this Natalie was talking to Kevin and Michele, talking about the coming weeks, she actually said to Kevin if she won HoH she would probably put him up, that it isn't who you nominate, but who votes that matters. Kevin seemed to be fine and laugh along. Natalie justified things saying she was just being honest. She also said that if Kevin were to ever stab her in the back, he would never get her vote - or Jesse's. Again this was said in a nice, matter of fact way.

The key is - this was all done in front of Michele - and Jeff was nearby as well. I think Natalie is still working her deception that she is NOT going after Jeff or Jordan next - keeping Jeff from being paranoid and wanting to keep Russel.

I'm telling ya - Natalie is playing a very smart game.

So Natalie still thinks she was the one swaying Jesse's opinion, and not the other way around? Hmm. Interesting.

And before I was kind of crapping on Kevin for being a wallflower for most of the game, but now I'm starting to think that he's just been playing his cards close to his vest this whole time. And it's been working so far. He's stayed under the radar, and has been collecting information and piecing things together as he goes along. This could be very advantageous to him in the next week or so.

But then again, with the paranoia being so damn high in the house he could easily be voted out for coughing while someone was telling a story.

Turns out Natalie had an even deeper plan. She wants Michele to propose to Kevin that they save Russell (since Nat has said she would nominate them) - then Kevin and Natalie would tell Jeff and Jordan Michele tried to save Russel and Jeff and Jordan will want Michele out next.

Like Natalie or not, she thinks ahead and tries to cover her basis. She knows how to set people up and then turn on them. All though she cant win shit, she sho know this game better than the other knuckleheads. If Jeff dont win, im pulling for the little giant.LOL

Well, if Nat or Kevin win HOH, it's pretty much J or J goes home in 7 days (could Jeff handle the humiliation of seeing Russell in 7 days? Nat would likely enjoy that happening.) and BB should start writing out Nat's check (assuming luck or something else doesn't go against her). Especially once she gets Kevin into the Jury House as vote No.4 (he may last up to F3). Then she'd beat anyone left (Jordan, Jeff, or Michelle).

Sure, Michelle or Jordan could win HOH, but with Jeff making comments like Kevin should win HOH, will Jordan really try her best, or trust her new BFFs have her back.

Still, if Kevin won HOH, would he make his move to get rid of Nat? I'm thinking he'd prefer to wait until the J&J team was broken, but he wouldn't be able to play for HOH the following week, so may feel he has to do it while he could, as the others have been so well suckered by Nat.

Hes not going after Natalie, why should he. If he gets rid of Natalie and Jeff and Michelle is still around, he is dead in the water the next week. He has to get rid of one of them. Natalie havent won jack nothing yet and he knows at least she is with him for now, If Kevin wins next week, he should be going after the people who could win and put him out next which is Jeff and Michelle.

Good point, AName. Natalie can manipulate people, but so far hasn't been able to win anything. I'd forgotten that. Oops...

And it was amusing to have Nat & Kevin move things around and AFTER they were done, told to put it all back! Rather pleased BB didn't say anything until they'd done all this... Thank you BB!