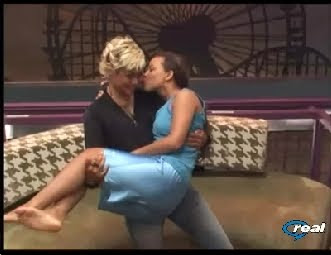 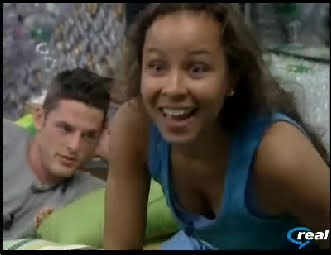 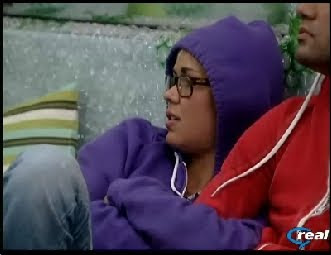 Somebody explain how this happened!

When I went to bed last night, Lydia appeared to be annoyed by anything and everything Natalie was saying (understandable, I know). Yet sometime during the night, they decided they loved each other, and at one point even cuddled!

Check out this exchange:

Not much else has happened. It's picture day, and everybody seems to be getting along pretty well. Jessie has told Jordan and Jeff that he wants to talk to them. It's clear he's really worried about tomorrow's eviction, and he's annoying Natalie with the constant talk of the mystery power.

Speaking of tomorrow's CBS show, there are rumors circulating that CBS is worried about the uproar that may occur if Jeff indeed uses the mystery power. An email was sent out to ticket holders stating that they needed to be at the studio's lot by 11:30 am, instead of the usual 2 pm. Speculation is that the eviction will be taped.

It makes sense to tape it . Not just because of Chimas threats but they have to make it fit into a hour. The usual flashback as to what has happened, new footage, Julie chatting with Chima, the live vote with the power most likely being used and the hoh. It would have to be smooth to pull off live.

Hogwash. Can't CBS get the 2 second delay on their live shows?

Something happens and quickly go to Julie. She can explain what had happened (game wise).

I think they need to sit down with the houseguests before the season and go over the rules with a fine tooth comb. Since when did being the HOH somehow guarantee you this magic power where you can make whoever you want go home? Obviously the odds are in your favor as you get to choose who is up for eviction, but somewhere along the line it devolved into this "HOH has infinite power and whatever they say is the law" type of deal. Do the people in the house not realize the HOH only has power for one week? That even if you did go against their "wishes" they can't directly do anything to you for at least a week?
GAH these people sometimes.

This is pretty ridiculous. The Control room is called that for a reason, so what the hell is the problem here? Can she not be controlled? If she gets too offensive, cut her fucking mic? These people signed a contract, they KNOW the rules. Her threatening to break them should do nothing more than put her at risk of being removed from the house. If anything, that would be a great gift to our ears.

"Can she not be controlled? If she gets too offensive, cut her fucking mic?"

This has to be the twilight of your day.... maybe finding something else to do sometime will cure this rage that forces you to use profanity like a drunk sailor.


Also, there is a board game version of BB where you are in total control and can boot anybody off anytime you like too. This may ease some of your stress with the houseguest. LOL

Yes. Using the F word releases my built up rage. Thanks for the psych analysis, Doc.

That's the reason why there is such a thing called a "mute" button on microphones.

A real Doc is what you need. I can only help you look into the mirrow where you will see a very bitter person who blames everybody for her miscomings. too bad girly