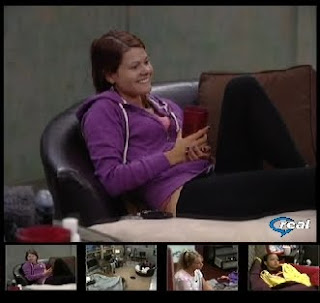 Sorry that there hasn't been an updates in the last few hours, but there's not a lot to report. Jeff and Jordan are still telling Michelle that Kevin is their target this week, but their paranoia against Russell has extended to Michelle. Russell attempted to talk to them in HOH, but all three were asleep.

There's a good chance that the veto competition is one of those "morph picture" contests, and Kevin has been spending a lot of time studying the picture wall. Russell would be well advised to do the same.

haha the Huffington Post has done it again.
I'm sorry Scott, but I think she is giving you a run for your money on the episode recap front.

I agree - it makes me reconsider whether I want to take my time to write something somewhat good, or continuing to go for the immediacy of having it completed within minutes of the broadcast.

I definitely like the immediacy. I can go back and piece together things I may have missed. But I miss your biting sarcasm and commentary though. That was my favorite part.

I like her recaps too, shes not nearly as bias and goes after everybody in the big brother house which is always refreshing too see done from time to time. LOL

Thanks, bish. I'm going to have to give some thought on this.

Jeff won i think by what he said

Jeff is already talking about getting rid of Russell, He thinks its the smartest move for himself and I agree. Hes not playing next week and if Russell and Michelle team up, hes done.. They cant be trusted

Let me see Production change his thinking.. He already said it will be an interesting Dr session and they went to fish before he could say another word.LOL

It would be nice to see Jeff win, as I always like to see a nice person win over people like Natalie.

That said, Jeff at some point has to look at where the jury votes are and how to eliminate the ones who would get more votes. And Russell is third on that list. I see the Jury preferring:

I've favored Nat going first, because she can play everyone so well, and has played others the best. But Kevin could get non-Team Jessie votes where Nat won't.

And the only way any of these boards can have any influence at all is either in mobilising America's Choice votes or BB reads them and adjusts plans (yeah, right...).