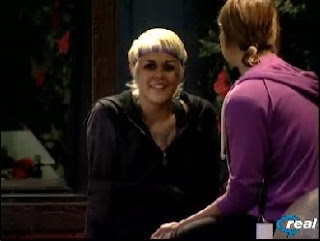 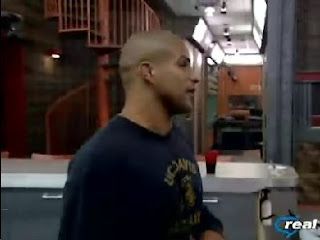 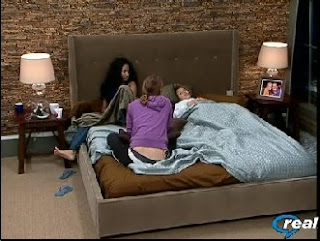 Last night, I was fully ready to sit through all of Showtime. Unfortunately, I gave up about an hour in. The house was annoyingly calm - Jessie and Natalie playing chess, then Jessie and Lydia playing pool. Jeff napping in the hammock, with Jordan working out. A few others sitting inside eating.

Russell was sitting by himself this entire time, and I made a big mistake turning off the television at the precise moment he suddenly had a huge smile and headed indoors. I should have known the wheels were turning in his head, and he had decided to make a move.

Not right away, though. Instead, it's the Jessie and Natalie show. Jessie really has figured out the ramificaitons of Jeff holding the mystery power, while Chima has suddenly realized that her week of HOH will mean nothing. "What the fuck did I win HOH for if the fucking mystery power is that you can take people down and put up whoever you want? Really? What am I here for then? That's all my power. You usurped my power. All I got is lotion and a luke warm shower. I would have a fit during the live show and then I'd camp my ass inside the DR."

Jessie's game of pool with Lydia was to inform her that Michelle apparently was spreading stories that Lydia would target Jeff. Of course, she runs to Jeff with this info, and Jordan advises Jeff that she just talk to Michelle. The two actually have a calm conversation that turns into a pep talk from Michelle.

Inside, Natalie (and Chima) is pissed that Jessie used her as the source of this story to Lydia. They (somewhat joingly, IMHO) threaten to cut him out of their communications.

Around this same time, Michelle and Russell have a somewhat civil conversation while they play pool. Well, it starts off civil as Russell subtly pushes the conversation, blaming her for everything that happened the previous week.

Finally pissed, she tell Russell to "fuck off" and heads upstairs. Michelle is pissed that Russell attacked her, and says she thinks it's to put a wedge between her and Jeff. It must have worked, as she reports that she also thinks that Jeff has the mystery power, and will use it to save Russell. She also spills all about Jeff, including their final two deal and the fact that he was Casey's sympathy vote.

Michelle finally leaves, only to have to deal with Russell again. "You're a nutcase...Ronnie was on point on everything he said about you. You are absolutely fucking psycho."

Natalie comes out to find out what's happening, and when Russell complains that she was up there spilling everybody's secrets, Natalie nods to the affirmative while claiming they were talking about "nothing, really".

After another ugly confrontation, Michelle heads back upstairs to listen to Chima complain some more about her power being usurped.

Everybody who doesn't have the feeds really needs to sign up now to see all of this silliness!

Is it smart for Jeff to use the power on Russell? It would hopefully cement the Rusell/Jeff tandem, but they'd automatically be even bigger targets than before if that's even possible.

If he uses it and Jesse goes out... all that's left of the 'old' power is Chima and Natalie, unless Michelle decides that girl power is going to work - but even then, Jeff, Russell, Jordan, Kevin, and Lydia can get rid of them in no time...

Jesse is gonna blow before Thursday... he is so afraid Jeff has that power and that he is going home....Jeff better not back down on it... If he doesn't use it Jesse will be gunning for him hardcore!

My guess is Natalie and Jesse will come up with a brilliant plan 9 sarcasm) to try and intimidate Jeff. They will start talking loudly to people that whoever has the power would be crazy to use itbecause they would become the target the next week. It wont work but these 2 meatheads will try. Jesse will have a nervous breakdown tonight.