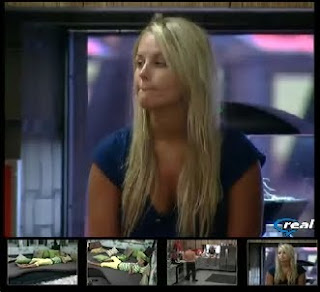 To say that Jordan is nothing but scenery is no exaggeration. She has zero skill at the game, she tends to trust anybody who talks to her, and she has only survived by riding on top of Jeff.

Somehow, though, she is destined to make the final four, and could easily skate by to the final three. At that point, a Michelle victory in the final HOH comps could lead her into the final two as Michelle is smart enough to understand that the majority of the jury house are allies of Natalie and Kevin.

Can an imbecile win Big Brother? Doubtful, but she's going to outlast her ride (despite her pleas for the house to keep Jeff over her).

Michelle's winning of the HOH means absolutely nothing as far as caring Jordan to the final 2. If Natalie or Kevins wins POV, they will send her home because they are the only vote and Michelle cant do anything about it.

I really think that if Jordan makes it to the final 2 against Kevin or Natalie, it is possible that she wins it all. she will get Michelle and Jeffs vote and if she can squeeze Russell's vote, america will surely give it to the goody 2 shoes loser.

She really dont deserve it but hey, if it get down to america voting then so be it. Hopfully its decided by the players and not by the bias american public

I agree it should not come down to America's vote....